One of the first K 30 bombers in Sweden prior to delivery. 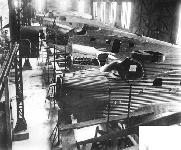 Production of K 30s for the USSR at AB Flygindustri in Sweden.

A fully-armed Junkers K 30, or JuG-1, fitted with skis. This is one of the first three examples delivered and it still has the early type of fin.

A pair of K 30 fuselages freshly painted and waiting at Limhamn to he shipped to the USSR.

Close-up of a K 30 bomber inside the hangar at Bulltofta, Sweden.

Float-equipped K 30 with a different type of bomb rack under the centre section.

Detail of the bomb racks of a ski-equipped K 30.

Interior of the fuselage of K 30 showing the retractable 'dustbin' gun turret.

The single-seat J 22 fighter, first flown on November 17, 1923, was not accepted for production at Fili due to its poor performance.

Корабельный поплавковый разведчик Ю-20
J 20 floatplanes were used by the 1st and 2nd Detached Naval Reconnaissance Squadrons based near Leningrad.

A newly-completed and painted J 20 hauled out from the factory on a special temporary transportation 'undercarriage' for the photographer. Floats were fitted later.

The first J 20 tests with skis were made at Fili in February 1924. The tripod crash-bar' protector seems to have been fitted specifically for the occasion.

The first J 20 was made available in Leningrad in November 1923 to be tested by the Soviets.

Fili aircraft production consisted mainly of the assembly of parts and subassemblies made at Dessau in Germany. Work on 20 J 20 floatplanes for the Soviet Air Force started in the autumn of 1923.

In August 1925 famous Soviet pilot B G Chukhnovsky attracted a great deal of attention when he flew a J 20 to Novaya Zemlya in support of an Arctic hydrographical expedition.