To boost numbers and to assist in training in 1954 the HKAAF received two Spitfire PR.19s, including PS854 that was delivered to Kai Tak in August 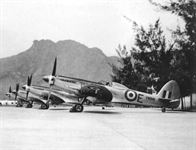 Duxford's Spitfire F.24 VN485 awaits its next sortie at Sek Kong during the HKAAF summer camp in October 1954. It is carrying underwing rockets.

Duxford's Spitfire F.24 is a survivor of the Hong Kong Auxiliary Air Force

Geoff Cairns, then an Air Vice Marshal, renewed his acquaintance with VN485 when it 'paraded' for the presentation of the Queen's Colour to the Royal Hong Kong Auxiliary Air Force, 1979.

On November 10, 2005, Spitfire F.24 VN485 was rolled out at the Imperial War Museum, Duxford, following restoration. It is now within the 'AirSpace' hall.

F.24 VN318 acting as a backdrop for the HKAAF's Spitfire pilots at Kai Tak after the final flypast.

Fg Off Rufus Heard snapped Flt Lt Geoff Cairns in VN485 during his last flight in an F.24 while he was serving as the regular RAF adjutant to the HKAAF in 1954.

When righted, VN492 came down so heavily that it was damaged beyond repair.

A few minutes after VN492's mishap, VN313 skidded off the runway, hit a building and sustained terminal damage.

When landing at Sek Kong during the first day of the 1953 summer camp VN492 tipped onto its nose.