Two views of the "Aero-Sport I," a dual-control school machine with 120 h.p. Mercedes engine.

The Junkers K.16 is a small cabin monoplane with accommodation for two passengers. The engine is a Siemens.

The Focke-Wulf A.16 is, perhaps, one of the most efficient German commercial aeroplanes. It is fitted with a Siemens 75 h.p. engine.

BRISTOLS FOR GREECE: One of a series of "Bristol" Advanced Training Machines recently supplied to the Greek Naval Air Service. Standing near the engine will be seen (left to right) Engineer-Lieut. Alifantis, Mr. C. F. Uwins (chief Bristol pilot) and Lieut.-Commander Retsinopoulo.

THE LOENING MODEL 34 AMPHIBIAN: Two views of the machine, showing it on the water with wheels up, and on land with wheels down. 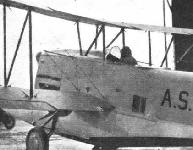 A "close-up" of the Loening Model 34 Amphibian, showing the position of the pilot and the retracting undercarriage.

THE LOENING AMPHIBIAN: View, showing the machine flying over Langley Field, Virg. The tractor-fuselage type of biplane and the flying boat are, it will be seen, ingeniously blended together to form a new type. It is fitted with a 400 h.p. inverted Liberty engine.

The Udet U.7 ("Kolibri") has a British Douglas engine.

The Udet U.12 ("Flamingo") is believed to be the first biplane built by the Udet firm. The engine is a Siemens.

The Blackburn "Dart" Seaplane: The machine just leaving the slipway, the wheels not yet having been raised.

THE BLACKBURN "DART" SEAPLANE: Some constructional features. In the upper left-hand corner is a view of the steel tube centre portion of the fuselage. Note the system of triangulation, and the main petrol tank. The other photographs show typical fittings, machined from the solid.

The Blackburn "Dart" Seaplane: Front view of the machine at the top of the slipway.

THE BLACKBURN "DART" SEAPLANE: The sprung skid on the heel of a float.

THE BLACKBURN "DART" SEAPLANE: The tail, with balanced rudder and elevator.

THE BLACKBURN "DART" SEAPLANE: The trolley, and its framework. This trolley is raised clear of the water as soon as the machine is afloat.

THE BLACKBURN "DART" SEAPLANE: Three views of the engine housing, engine mounting, and complete nose. The engine is a Napier "Lion."

The Sikorsky S.29A Commercial Biplane: A twin-engined (400 h.p. "Liberty") transport machine designed and constructed in America by the well-known Russian designer, Igor Sikorsky; it is almost entirely of metal construction.

The Fairey "Fremantle": A long-range twin-float seaplane with Rolls-Royce "Condor"engine. This machine carries a crew of five. The main petrol tanks are housed in the floats, which are exceptionally large, giving the machine a cruising range of approximately 1,100 miles. The top speed is about 100 m.p.h. and the cruising speed 80 m.p.h. A feature of the machine is its large wireless cabin, which is situated aft of the pilot's cockpit. 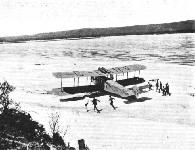 A Westland Limousine in Canada: But for the Westland Limousine (Napier "Lion'') shown above, the mining village of Rouyn in Canada would be isolated from civilisation during the winter months, for snow and ice renders the roads useless. Westland Limousines, however, maintain a daily in-and-out service between Rouyn and Larder Lake - a distance of about 100 miles - and thus provide the inhabitants with fresh supplies from the "Larder." The machines are fitted with skids in place of wheels, enabling them to function on the ice and snow.

A two-seater glider at Rossitten: The Academic Flying Group, Darmstadt's "Margarete," in flight over the Kurischen-Haff. Note the kind of country over which the machines fly.

The German ''Kustenflug, 1925' : This year's competition over the sand dunes surrounding the Kurisches-Haff, in the Baltic, has attracted a fairly large number of gliders and at least one light 'plane. Our photographs show : 3 shows an exciting take-off by the "Espenlaub 5," in which the starting crew had to fall flat to avoid the machine. 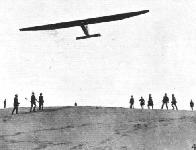 The "Espenlaub 5" is seen in flight. Note the high aspect ratio.

The Udet U.10 low-wing monoplane is designed for sport flying, and has a Siemens engine.

The Udet U.8 is a commercial monoplane with Siemens engine.

THE BRUSSELS-CONGO FLIGHT: This photograph shows the three-engined Handley Page aeroplane in which Lieut. Thieffry and his companions flew from Brussels to Congo. The central engine is a Rolls-Royce "Eagle IX," while the two wing engines are Siddeley "Pumas." The machine was fully described and illustrated in "FLIGHT" on May 1, 1924. This particular machine was built under licence in Belgium by the S.A.B.C.A. Company.

The Dietrich D.P. Ha biplane is of slightly greater power than the monoplane, being fitted with a Siemens 75 h.p. engine.

The German ''Kustenflug, 1925' : This year's competition over the sand dunes surrounding the Kurisches-Haff, in the Baltic, has attracted a fairly large number of gliders and at least one light 'plane. Our photographs show : 1, The "Delphin" of the East Prussian Aviation Society in flight. This machine is built as a miniature flying boat so as to be able to alight on the water.

The machine is shown on the beach. Note the unusual lateral control.

At Rossitten: A fine start by the "Donnerstag Klub" of the Grunau Gliding School.

For the German "Rundflug": The light monoplane of the Flugtechnischer Verein, Spandau. The engine is a 30 h.p. two-cylinder Haacke, air-cooled.

Side view of the Flugtechnischer Verein ''Spandau'' monoplane. The engine is a Haacke of 30 h.p.

AN INTERESTING FRENCH SHIP'S 'PLANE: A single-seater parasol monoplane scout constructed by Ateliers des Mureaux of Paris. Fitted with a 300 h.p. Hispano-Suiza engine, it is intended for use with the fleet, and in order to enable it to alight on the water and keep afloat the front part of the fuselage is made watertight, being constructed in a similar manner to that obtaining in flying boats. There are also two stumpy, wing-like floats mounted on each side of the fuselage, low down near the nose, whilst the undercarriage can be dropped bv the pilot before alighting. The span of the machine is 39 ft. 4 ins., the weight, empty, 1,980 lbs., and fully loaded 3,124 lbs. 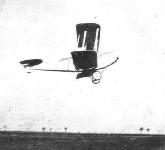 The L.F.G. type V.40 high-wing monoplane is of very clean design. The engine is a Siemens 75 h.p. radial.