IN some ways the Halton Aero Club is unique. Formed in December, 1925, as a service club among the staff and apprentices at Halton, the chief training centre for apprentices in the Royal Air Force, the club already has a membership of more than 1,100, and the funds of the club have been raised by 5s. and 2s. 6d. shares. The apprentices alone have raised in this way L170. The club was formed with the object of increasing the interest of both the staff and the boys in their work by designing and building machines of their own and entering them in such competitions as may occur. At the same time it was hoped that the carrying out of this work from the first ideas to the finished aeroplane might help to improve the liaison between the various branches of the staff. When the first machine has been completed it is intended to arrange for a series of lectures to be given to the apprentices by those responsible for the various branches of the design and construction.
The H.A.C. 1, or "Mayfly," as it has been somewhat facetiously called by the apprentices, is the club's first effort. It has been designed by the school educational staff, and built in the workshops largely by the apprentices under the supervision, and with the assistance, of their officers, N.C.O's. and civilian instructors. Some of the work has been carried out as part of the regular training of the apprentices, but the majority has been voluntary spare time work on the part of all concerned, and one wishes the club every success in the future. It is obviously tackling the job in the right spirit. It is, therefore, all the more to be regretted that as far as can be seen at the moment the machine is unlikely to be finished in time for the Lympne meeting.
But few particulars relating to the construction of the H.A.C. 1 are available, but the general arrangement drawings show the machine to be a biplane with "X" interplane struts and a total wing area of 195 square feet. The weight of the machine empty is 480 lbs., and the weight of fuel and oil is 60 lbs., while the useful load is 340 lbs., giving a total loaded weight of 880 lbs. and a wing loading of 4-5 lbs. per sq. ft. The estimated top speed is 76 m.p.h., and the landing speed 38 m.p.h. The wing section used is R.A.F.15. The engine is a Bristol "Cherub," which drives a Fairey-Reed duralumin propeller.

THE BRISTOL FLYING .MEETING: 1, Line-up for the Final of the First Handicap Race. The machines include, from left to right, the Halton "Mayfly," Lady Bailey's "Moth" PU, Watt's "Avian," QL, and the Farnborough Club "Avian," ON.

SHERBURN AIR PAGEANT: (1) This shows the line up for the President's Light Aeroplane Handicap; 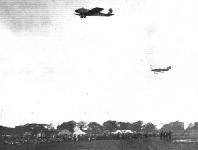 WAKEFIELD HANDICAP: Flt.-Lieut. Le Poer Trench on the Halton monoplane "OO," leading Flt.-Lieut Soden on his D.H. "Moth" (Genet) "OU" in the second lap of the race, which was eventually won by the former at 80 1/2 m.p.h.