WG774 now resides at the Fleet Air Arm Museum, Yeovilton, aptly in the company of Concorde 002.

The ground 'sit' of the 221 is well illustrated in this picture taken at the 1964 Farnborough show.

WG774 now resides at the Fleet Air Arm Museum, Yeovilton, aptly in the company of Concorde 002.

The BAC Type 221 on the day of its roll-out in July 1963. Note the spindly new undercarriage compared to the Fairey Delta 2 - the main gears were new but based on the design used for the English Electric Lightning 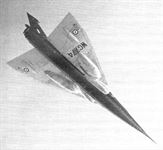 Because of the basic similarity between the wing plan forms of the Type 221 and Concorde, it was announced by BAC’s press office that "the 221 research programme will make an important contribution to Concorde development."

Compared to the Delta 2, the elevators and ailerons of the Type 221 had increased area, as is evident in this view.

Another view of the Type 221 being rolled out after completion at BAC's Tilton works. The press release stated that the 221 "is specifically intended for investigating the handling properties of the slender delta and for flight research into the aerodynamic characteristics of this planform in the subsonic, transonic and supersonic speed ranges."
Construction of the BAC 221 research aircraft was completed in October 1963
During the summer of 1959, the first of the two Fairey FD.2 high speed research deltas, WD 774, was singled out for major modification to help with the high speed phase of Concorde wing development. Transferred from the RAE, Bedford to BAC's Filton facility, WD 774 underwent major surgery, to emerge four and a half years later as the BAC 221, as seen here at its roll-out. First flown in this guise with its new ogival wing on 1 May 1964, this machine returned to RAE, Bedford in May 1966, from where it continued to fly for the next eight and a half years.

Note the 221's cine camera bullet fairing on top of the fin which is quite prominent in this picture; the camera was used to record airflow patterns

WG774 demonstrates its droop nose capability as it passes the camera

The original proposal for the Delta 2 fitted with an ogee wing as 'Project 86', September 1958. Note the above wing intake position and the old delta wing also outlined on the plan view