AN AMERICAN SCHNEIDER CUP DEFENDER: This photograph shows the Army-Curtiss racer on which Lieut. Cyrus Rettis of the U.S. Army Air Service won the Pulitzer race at a speed of 248-99 m.p.h. Similar machines, fitted with floats, will be used as defenders in the Schneider Cup seaplane race.

Peering for the Mercians: A Wessex Bristol low over Whitchurch in heavy rain

IMPERIAL AIRWAYS' NEW AIR LINER: On Tuesday, October 27, the Vickers "Vanguard," fitted with two Rolls-Royce "Condor" engines of 650 h.p. each, took up a party at the Croydon Aerodrome, when a complete luncheon was served on board. Very bumpy weather somewhat interfered with the enjoyment of the lunch. The machine was piloted by Major H. G. Brackley, Air Superintendent of Imperial Airways, and the Director of Civil Aviation, Air Vice-Marshal Sir Sefton Brancker, acted as "spare pilot." The machine has seating accommodation for twenty passengers, and has a top speed of 112 m.p.h. Our photograph shows (1), front view of the machine; (2), a group of distinguished passengers, including, from left to right, Capt. Acland, Major Mayo, Air Vice-Marshal Sir Sefton Brancker, Major Brackley, and Squadron-Leader Payn. (3), View of the machine in flight, and (4), Side view.

Супермарин S.4 - первый из знаменитых гидросамолетов Р.Митчелла
THE SCHNEIDER CUP RACE: This official photograph of the Supermarine-Napier S.4 admirably shows the very "clean" lines, and it is indeed difficult to see where any head resistance could have been saved. This machine, before going to the United States, established a new world's speed record for seaplanes by flying at an average speed of 226-752 m.p.h.

THE BRITISH SCHNEIDER CUP CHALLENGERS: This front view give an excellent idea of the manner in which head resistance has been cut down to a minimum. It was on the Supermarine-Napier S.4 that Capt. Biard established a new world's record for seaplanes by flying at an average speed of 226 752 m.p.h.

THE CIERVA "AUTOGIRO": These three views show admirably the action of the four-bladed lifting screw or windmill. In the lower view the machine is at rest on the ground, and the wings are drooping slightly.Above, the windmill has been started by means of a cable and has acquired a certain amount of speed, the the machine having just started its run. In the top photograph, the machine is seen shortly before "unsticking," the lifting planes having started to rise under the action of the lift. This is particularly noticeable in the wing pointing forward in the first photograph.

THE "AUTOGIRO": Two views of the machine in flight. Note how the high tip speed of the windmill beat our photographer.

THE CIERVA "AUTOGIRO": This photograph shows Capt. Frank Courtney, the pilot of the machine, and Senor de la Cierva, its designer.

The "Autogiro": A close-up view of the supporting mast, hinges and rubber cord top bracing which prevents the wings from drooping.

THE CIERVA "AUTOGIRO": Front view. A mechanic may be seen winding the starting cable around its supports on the wings.

View of the Dornier "Wal," which visited Southampton recently. The photograph shows the machine at rest on the sea 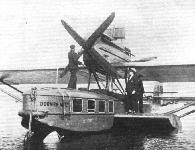 View of the Dornier "Wal," which visited Southampton recently. The photograph shows a view of the nose and the two Rolls-Royce "Eagle" engines.

Prague - Croydon - Prague: Lieut. Jira, of Czechoslovakia, who recently flew from Prague to Croydon and back on an Avia B.H. 9 low-wing monoplane, 60 h.p. Walter engine. Although he did not succeed, owing to bad weather, in making non-stop flights as intended, he nevertheless put up a remarkable performance, covering the 2,525 km. (1,565 miles) at an average speed of 140 k.p.h. (86 9m.p.h.)

THE THIRD PRAGUE AVIATION MEETING: One of three successful competing machines. One of the Avia B.H.10 monoplanes (60 h.p. Walter) which took part in the Sport 'plane race.

"THE CUCKOOS" (No. 25 FIGHTER SQUADRON): "Off in Eight Minutes." Pilots running to their Grebes on receipt of urgent order.

No. 56 Fighter Squadron off on a mission

TAKING OFF BY FLIGHTS: In eight minutes exactly from receipt of the order the three flights of No. 25 Squadron were in the air

THE RETURN AND THE DISPERSE: No. 25 has accomplished its mission

THE RETURN AND THE DISPERSE: Letting off Steam. After breaking formation the pilots of No. 25 display a little individuality.

THE SCHNEIDER CUP RACE: This official photograph of the Gloster-Napier III gives a very good idea of the general design. Noteworthy features are the very careful streamlining and the small size of the machine in relation to its floats.

THE BRITISH SCHNEIDER CUP CHALLENGERS: This front view give an excellent idea of the manner in which head resistance has been cut down to a minimum.

THE SCHNEIDER CUP RACE: This side view of the British challenger, the Gloster-Napier III 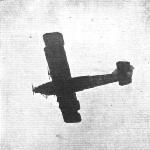 The Handley Page "Hampstead" arriving at Farnborough from Croydon.

THE HANDLEY PAGE "HAMPSTEAD": Some detail features. 1 shows the front portion of the saloon, with instruments, sliding panel leading to pilot's cockpit, and net racks. The tubes of these serve as diffuser boxes for the fresh air. In 2 are seen the ripping panels in the roof, while 3 shows the special door handle of the luggage compartment, designed to facilitate sealing by Customs officials. 4 gives details of the compression rubber springing, and 5 shows the ladder to the cockpit, the starting handle for the front engine, and the hot-air muff around the exhaust pipe.

Bristol "Cherub" in Germany: At the recent International meeting at Munich, the Messerschmitt M.17 monoplane, fitted with Bristol "Cherub" engine, obtained first place in both the altitude and the speed competitions, and, according to Herr Messerschmitt, the "Cherub" "ran like clockwork from beginning to end of the competitions." The pilot was Herr Karl Croneiss.

THE ALBATROS L.69: This front view shows the clean lines of the machine, and the cowling of the Bristol "Lucifer" engine.

THE ALBATROS L.69: Three-quarter rear view. The fuselage comes to a point at the back, this cone being detachable so as to give access to the control levers, etc.