Saab S 29C Fv 29906 “White B” was one of two examples sent to Congo in November 1962 to join F 22. The standard Flygvapnet bare-metal colour scheme was replaced with a locally improvised three-tone camouflage.

Two J 29Bs were designated ‘‘White G” by F 22 during the unit’s African sojourn; the first was lost in March 1962 during a landing accident and the second, Fv 29364, which arrived in December that year and was never camouflaged, is seen here at Kamina being towed out by a Volvo Startbil 954 in 1963 to be destroyed.

Down among the treetops - this remarkable photograph shows how low the Tunnans of F 22 operated over the Katangese bush. One of the unit’s J 29Bs hit a tree with one of its wing­mounted droptanks, which burst into flames before being promptly jettisoned by the pilot.

The pilots of F 22’s unofficial display team get the wheels up quick­smart during a formation take-off from Kamina in 1962. When British test pilot Robert Moore made the type’s first flight in 1948 he described it as “an ugly duckling on the ground - but in the air a swift!”

The men and machines of the UN’s 22 Fighter Sqn on parade at N’djili Airport in Leopoldville (now Kinshasa) after the arrival of F 22 on October 4, 1961. Nearest the camera is the unit’s first commander, Lt-Col Sven-Erik Everstahl.

After F 22’s arrival at Kamina, a 6,600ft (2,000m)-long stretch of straight road between sections of the base, known as “Route Royale”, was tested as a possible alternative landing strip. A mere 21ft (6-3m) at its narrowest point, it was deemed too narrow after two test landings for anything other than the most severe emergencies.

Possibly taken from a Swedish Curtiss C-46, this photograph shows four of the original Tunnans of F 22 in formation over terrain typical of southern Congo. For the African deployment the unit initially retained the type’s standard bare-metal scheme but replaced the Flygvapnet roundels with a white square bearing the letters “UN”.

The 20mm Hispano-Suiza cannon of a J 29B of F 22 loaded with a mixture of black-tipped armour-piercing rounds and high-explosive grenades.

In January 1963 a pair of J 29Bs was based at the Katangese capital Elisabethville to provide protection for UN air transport operations in the area. The two Tunnans, Fv 29364 and Fv 29371, were from the final wave of four fighters sent in December 1962, all of which retained a bare-metal colour scheme and bore “ONU” markings.

The two J 29Bs based temporarily at Albertville during late November 1962, with Lake Tanganyika visible in the background. Both were damaged during operations, Fv 29475 ("White J”) taking a bullet to an engine mounting during a low-level ground-attack sortie and Fv 29374 ("White D”) being written off after a landing accident at Kamina.

Colonel Sven Lampell was appointed ONUC’s Chief Fighter Operations Officer with the arrival of F 22 in Congo in 1961. Lampell later went on to participate in Red Cross operations in Biafra during 1968-69 and Bangladesh during 1971-72.

J 29B Tunnan Fv 29475/“White J”, captured by the forward-facing camera of one of the two S 29C photo-reconnaissance variants sent to Congo in November 1962. The bright African light contrasted starkly with the northern European low-light conditions in which the S 29Cs usually operated, resulting in super-sharp images.

The first attack on Kolwezi airfield as part of Operation Grand Slam on December 29, 1962, met with spirited small-arms fire from the ground. Worst hit was the leader of the six-aircraft group, Maj Olof Lindstrom flying J 29B Fv 29374, "White D”, which was hit by a bullet which passed through the front of his canopy from side to side, missing his face by inches, leaving a pair of sizeable holes, as seen here

Following its accident on March 11, 1962, J 29B Fv 29440, the first “White G”, was used for camouflage tests and fire drills. Note the word soptunna - “rubbish barrel" - daubed on the forward fuselage.

The end of the road - following the disbandment of the UN’s 22 Fighter Sqn in August 1963, the remaining six J 29Bs were taken out to the Kamina firing range and destroyed with explosives. Here Swedish personnel pick through the remains of Fv 29393, ‘‘White E”, after its disposal in September 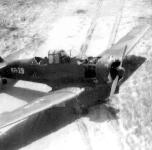 Avikat North American T-6 KA-29 photographed by a very low-level S 29C at Kolwezi on the first day of Grand Slam operations at the end of December 1962.