Gustav Hamel making his last flight at Brooklands, in a Bleriot XI monoplane. Hamel’s aviation achievements were outstanding, including the first cross-Channel flight with a woman passenger, the first flight from the UK to Germany and the carriage of the first official airmail in Britain. Aged only 24 years old, Hamel went missing over the English Channel on May 23, 1914.

Merriam in fez in the cockpit of one of the Bristol school’s Prier monoplanes at Brooklands with a group of Turkish pupils in 1912. From left to right: instructor Sydney Pickles; pupil Fazil; an air mechanic; pupils Abdullah and Aziz; unknown; mechanic S. Summerfield; pupil Fethi; chief engineer Willis and pupils Mehmet Ali and Sahni.

The Bristol “Sociable” - a Prier monoplane two-seater with side-by-side seating - in which Merriam was seriously injured, and his pupil George Gipps was killed, at Larkhill on January 26, 1914. According to Flight, after the aircraft dived into the ground, Merriam ‘‘jumped out of the machine, ran a few yards and then fell on his face”. 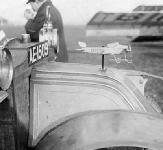 Car customisation Edwardian-style - a handmade scale model of one of the Bristol school’s Prier monoplanes made a delightful ornament for the bonnet of Merriam’s motor car at Brooklands.

Frederick Warren Merriam, one of Britain’s original "magnificent men”, beside a Bristol Boxkite at Larkhill in 1913. 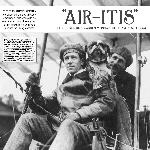 Teaching an old dog new tricks - Frederick Warren Merriam (left) and fellow aviation pioneer Harold Barnwell with furry friend in a Bristol Boxkite at Brooklands. Merriam's own caption to the photograph reads: “First bulldog to fly, 1912. Barnwell holding the dog while I piloted. It is generally known that once a bulldog digs his teeth into one it doesn’t let go... this was in my mind and although rather restless at first he soon got used to the sensation and seemed to enjoy his novel experience”.

Merriam (standing with arms crossed) and some of his early pupils with a Bristol Boxkite at Brooklands in 1911. Sitting in the pilot’s seat is fellow Bristol flying school instructor Collyns Pizey, who took Merriam for his first flight. In 1913 Pizey was appointed to the British Naval Mission to Greece, where he died of dysentery in 1915.

Built at Hendon, Grahame-White XV serial number 1321 was accepted for RNAS service by Merriam at Chingford in April 1915. Merriam later undertook “long, thankless patrol flights in Short seaplanes, so tiring to handle in rough weather” from Cattewater and Padstow.