Consolidated Liberator Mk I c/n 2 was originally given the RAF serial AM259, but official documents show that the aircraft flew with the civilian registration G-AGCD for its Festoon and Sealyham flights to the Soviet Union during 1942-44.

The first Liberators to arrive in the UK were six of the seven YB-24s built for US Army Air Corps service trials (serials 40-696 to 40-701), but which were delivered to the UK from March 1941 as LB-30As for transatlantic ferrying duties. This example is AM259, which was photographed with its civil registration, G-AGCD, in May 1941.
Liberator G-AGCD following its conversion to civil configuration at the end of April 1941. The aircraft went on to have a distinguished wartime career, including participating in the vital resupply flights to the Middle East in July 1942, before being struck off charge at Dorval in November 1945.

The first Liberator to arrive in the UK, at Squires Gate on March 14, 1941, AM259 was allocated to BOAC and given the civil registration G-AGCD the following month, before beginning extensive operations on the Corporation’s transatlantic Return Ferry Service between Prestwick, Newfoundland and Montreal.

Typical accommodation looking aft in the cabin of a Ferry Service Liberator, with side seats in the rear of the cabin, bunks in the bomb bay and a shelf - known as the “Bridal Suite” - above the bomb-bay.

The Pe-8’s wingspan of 128ft 4in (39-13m) was greater than that of any contemporary operational British or American four-engined bomber, although the B-24 Liberator’s slender Davis wing of 110ft (33-5m) came close. Note the Hurricane seen here in the background at Tealing, home to the RAF’s No 56 Operational Training Unit.

Petlyakov Pe-8 c/n 42066, the 28th production example of 93 built, was relatively new when called upon to transport the Soviet Foreign Minister on his travels. The radiators for the cooling of all four liquid-cooled V12 engines were installed in the two inner nacelles.

The Pe-8’s wingspan of 128ft 4in (39-13m) was greater than that of any contemporary operational British or American four-engined bomber, although the B-24 Liberator’s slender Davis wing of 110ft (33-5m) came close. Note the Hurricane seen here in the background at Tealing, home to the RAF’s No 56 Operational Training Unit. 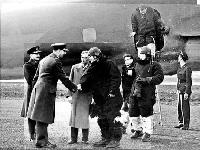 Originally conceived as a medium reconnaissance-bomber made from non-strategic materials, the Albemarle started life as a Bristol design, the type’s heritage in terms of its general configuration and distinctive Blenheim-type scalloped nose being much evident; but the aircraft proved inferior to the RAF types it was meant to replace, and it was quickly relegated to general duties in service.

One of the 14 Albemarles despatched to the Soviet Union by No 305 FTU at RAF Errol. Two of these, P1455 and P1645, were lost en route and another, P1647, had to return following oil­feed problems. It was, however, fixed and sent again.

Two of the three de Havilland D.H.95 Flamingos built to RAF specifications fly together in formation in October 1940. Nearest the camera is R2764, which crashed on April 30, 1942, with several Soviet VIPs aboard.

Another type which made an invaluable contribution to the establishment of an air bridge between the Allied leaders was the Boeing 314A Clipper, BOAC examples of which carried Churchill to the UK from the crucial Arcadia conference in Washington in January 1942 (G-AGCA Berwick) and back to the USA for the Second Washington Conference that June (G-AGBZ Bristol, as seen here).