The 1/10ths-scale flying proof-of-concept LDA 01 at the Paris Air Show in 1975. Note how the aircraft is painted in camouflage on the port side and in civil colours on the starboard side.

OUR TRIBUTE TO the late David Lockspeiser in TAH8 included the story of how the designer and test pilot was prevented from demonstrating his Lockspeiser Land Development Aircraft on the last commercial day of the 1975 Paris Air Show - by a swarm of bees which settled on the canopy moments before he could climb aboard. The photograph, which has subsequently come to light, captures the scene, as an airport fireman tries unsuccessfully to sweep the swarm into a plastic crate, rather diverting visitors’ attention from Tupolev Tu-144 CCCP-77144 and Ilyushin Il-76 CCCP-76500/366 in the background. The bees, which were eventually washed off using fire-extinguisher foam, actually did Lockspeiser a big favour, because when he was taxying the LDA later that day the starboard main undercarriage leg sheared off owing to a welding fault. Had it happened on take-off or landing on the demo flight, the consequences could have been serious - both personally and commercially. 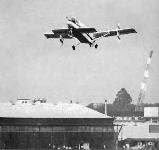 The many faces of David Lockspeiser MRAeS CEng, one of Britain’s most highly-respected test pilots and engineers. At the controls of his own LDA design;

With a revised mainwheel arrangement and back in overall civil colours, the LDA 01, registered G-AVOR, is demonstrated by its designer in the summer of 1976. The following year David moved to Singapore to work on upgrades to the nation’s Hunters, but he resumed work on the LDA on his return to the UK in the mid-1980s. 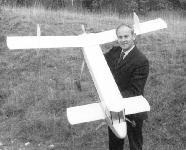 David with a scale model of the ingenious but ill-starred Land Development Aircraft (LDA) he developed at Dunsfold with George Smith.