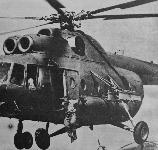 Troops disembarking from a hovering Mil Mi-8 military helicopter. This differs from the commercial version in having circular cabin windows and twin weapon-carriers on outriggers 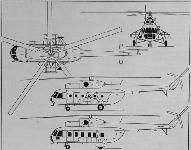 HAL-built MiG-21M, the first example of which was completed in February 1973

Version of MiG-21 known to NATO as "Fishbed-K"; wingtip ECM pods not fitted

MiG-25 ("Foxbat-A") interceptors taking off, with their landing light switched on

Several Buccaneers have been used for research and other special duties, including flight development of the radar for the Tornado GR Mk 1
First of two Buccaneer S.Mk 2s converted by Marshall as avionics testbeds for the Panavia MRCA

Third production Concorde, which, like the first production aircraft, has been finished in Air France insignia

Artist’s impression of the Advanced Harrier for the US Marine Corps, minus the 20 mm under gun packs and five weapon pylons that it would normally carry

Hawker Siddeley Harrier GR.Mk 3 single-seat V/STOL close-support and reconnaissance aircraft with laser rangefinder in nose. This will be fitted retrospectively to all GR.Mk 3s.

Refurbished Hawker Hunter Mk 58A of the Swiss Air Force, subject of a modification programme by the Federal Aircraft Factory

The Orao single-seat fighter, built in partnership by Romania and Yugoslavia

Aero L-29 Delfin two-seat jet trainers, production of which has now ended after the manufacture of more than 3,000

Lockheed L-1011-100 TriStar medium-range transport in the insignia ot Saudi Arabian Airlines. This aircraft will be retrofitted in 1976 with RB.211-524 engines and redesignated L-1011-200 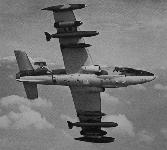 First production example of the single-seat Impala Mk 2, based on the Aermacchi M.B. 326K and built by Atlas Aircraft Corporation

Dassault Mirage F1-C of No. 3/30 “Lorraine” Squadron of the French Air Force, at Reims

The projected AEW version of the Hawker Siddeley Nimrod

One of the three Nimrod R.1s, XW665, operated by No. 51 Squadron. R.A.F. Wyton. Note the modified tailcone in place of the MAD boom and the revised contours of the port wing leading-edge pod

Kaman YSH-2E, one of two HH-2Ds modified to carry a new-type radar antenna and other Mk III LAMPS equipment

Second prototype of the Sikorsky YUH-60A utility transport helicopter, which flew for the first time on 21 January 1975

Second prototype of the Panavia MRCA multi-role combat aircraft, with its wings in the fully-swept position

Loading containerised freight on to an Ilyushin Il-76 transport aircraft

Myasishchev M-4, in the form known to NATO as "Bison-C”, with additional side view (centre) of "Bison-B”

Grumman KA-6D Intruder tanker of US Navy Squadron VA-145, based on the USS Ranger

LTV Aerospace YA-7H, a prototype two-seat version of the A-7 Corsair II

Lockheed S-3A Viking anti-submarine aircraft of US Navy Squadron VS-21, based on the carrier John F. Kennedy 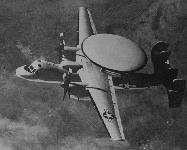 Prototype Boeing 747SP reduced-capacity long-range airliner (foreground), accompanied at its roll-out by the first 747, built in 1968

Nose-loading of the Boeing Model 747-230F freighter being demonstrated

Boeing 747-123, delivered originally to American Airlines and since converted to all-cargo configuration for Flying Tigers

A two-seat training version of the MiG-21, in Czechoslovakian insignia

Lockheed L 100-20 version of the commercial Hercules, with additional side view (bottom) of L 100-30 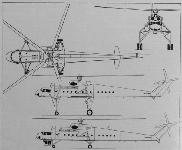 Mil Mi-10 flying crane derivative of the Mi-6, with additional side view (bottom) of Mi-10K

Tupolev Tu-144 supersonic transport, in production form, with foreplanes extended. This aircraft was displayed at the 1975 Paris Air Show

The version of the Yak-28 two-seat tactical attack aircraft known to NATO as “Brewer-C”, with additional side views of “Brewer-B” (top) and the Yak-28U (“Maestro”) tandem-cockpit trainer (centre)

L-410AF aerial survey version ot the Turbolet, with modified nose, in the insignia of a Hungarian customer

Volpar Turbo 18 conversion of the Beechcraft Model 18, operated by the US Public Health Service for air sampling 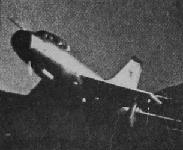 Ми-24Б ("изделие 241", "HIND-A")
These first illustrations of the Mil Mi-24 gunship and assault transport helicopter, which is now being deployed in substantial numbers by the Group of Soviet Forces in Germany and other components of the Soviet armed forces, depict two variants of the basic design designated by the Air Standards Co-ordinating Committee as Hind-A and Hind-B (on photo). The wings of the Hind-B differ in configuration and are set at a sharp angle of incidence. Comparable with the Sikorsky S-67 Blackhawk, the Mi-24 uses similar gearboxes, power plant, drive shafts and controls to those of the Mi-8.

Mil Mi-24 assault helicopter, in the form known to NATO as "Hind-A"

Mi-2M modified version of the Mi-2, with widened 10-seat cabin and retractable nosewheel

Helio AU-24A armed version of the Stallion, with LAU-68A/A rocket launcher and B-37K-1 bomb container beneath the wings

The reconnaissance version of the MiG-25, known to NATO as "Foxbat-B". Note the camera-carrying nose and absence of wingtip fairings

Antonov An-30 aerial survey development ot the An-24 twin-turboprop transport aircraft, with glazed nose and other modifications 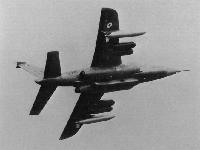 Prototype of the Bell AH-1Q TOW Cobra during qualification testing 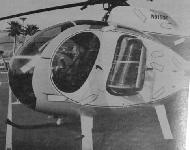 Development version of Antonov An-28 with TVD-850 turboprop engines

The tandem-cockpit training version of the Tu-22, known to NATO as “Blinder-D"

The DC-10 Series 30 Dag Viking in service with SAS

Tupolev Tu-16, in the form known to NATO as “Badger-F”, with additional side view (bottom) of “Badger-D”

This A300B1 was leased by TEA of Belgium to Air Algerie during the Winter of 1974-75. With a nine-abreast 323-passenger layout, it was used to carry pilgrims on the annual journey to Mecca

Gates Learjet 36 twin-turbofan executive transport flying in company with the first UK-registered Learjet, a Model 25B

A Lockheed C-5A Galaxy of the USAF accepts what is, for it, part of a conventional load

Mil Mi-10 flying crane derivative of the Mi-6, with additional side view (bottom) of Mi-10K 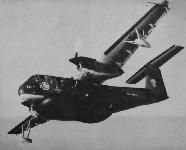 Strikemaster Mk 82A of the Sultan of Oman's Air Force, armed with 80 mm rockets and 245 kg bombs

Cessna Skylane II, a de luxe version of the Model 182 with factory-installed avionics

Northrop SF-5B two-seat fighter trainer, assembled in Spain by CASA and operated under the designation CE-9 by the Spanish Air Force

Prototype of the Boeing Vertol Model 179, a commercial derivative ot the YUH-61A

One of the Safaris used for famine relief in Ethiopia, with dropable underwing load 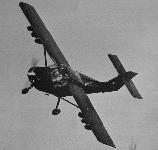 Kawasaki KV-107/IIA-5 of tho JASDF, with rescue hoist and sliding main door to fuselage

The version of the Yak-28 two-seat tactical attack aircraft known to NATO as “Brewer-C”, with additional side views of “Brewer-B” (top) and the Yak-28U (“Maestro”) tandem-cockpit trainer (centre)

McDonnell Douglas DC-9 Series 30 in the insignia of Aviaco

Myasishchev M-4, in the form known to NATO as "Bison-C”, with additional side view (centre) of "Bison-B”

Dassault Mirage M5-F in service with the French Air Force 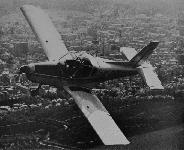 CASA C.212 Aviocar military transport and general-purpose aircraft in the insignia of the Portuguese Air Force

Second of the tour development aircraft tor the JA 37 interceptor version of the Saab Viggen combat aircraft, and the first to be fitted with the RM8B engine 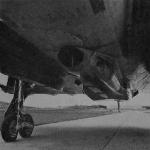 MBB BO 105HGH, a modified version of the BO 105 for high-speed research

Gates Learjet 36 twin-turbofan executive transport flying in company with the first UK-registered Learjet, a Model 25B 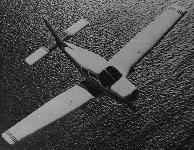 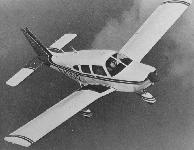 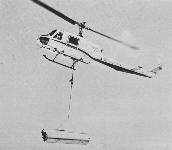 Fuji-Bell 204B-2 medium helicopter, demonstrating the carriage of externally-slung cargo 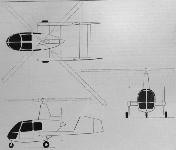 Lockheed C-141 StarLifter modified by LAS as an Airborne Infra-Red Observatory, with dorsal port forward of wing for a 15,000 lb (6,804 kg) infra-red telescope

Bell AH-1J SeaCobra of USMC Squadron H&MS-24, off the coast of Oahu, Hawaii 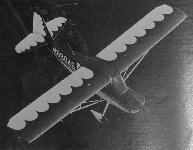 Northrop F-5E Tiger IIs of the US Navy, used as advanced high-performance fighters in air combat training of F-14 and F-4 pilots 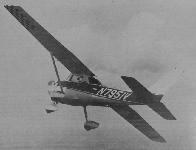 Model A150 Aerobat, the aerobatic version of the basic Model 150

Lockheed EC-130Q command communications aircraft of the US Navy 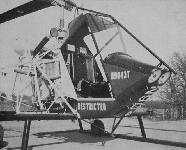 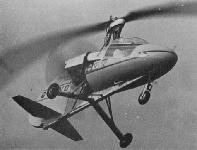 Dornier Do 28 D-2 Skyservant of the Federal German Navy

Piper Pressurised Navajo in service with the Spanish Air Force

Fairchild AU-23A Peacemaker, a counter-insurgency version of the Pilatus Porter 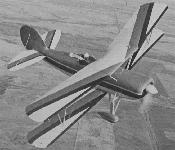 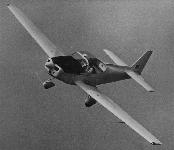 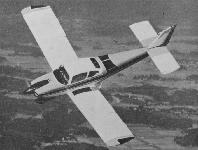 Prototype of the Grumman American Cougar, a new contender in the lightweight twin-engine category

Lipnur LT-200 two-seat light aircraft, based on the Pazmany PL-2

Let Z-37A Cmelak single-seat agricultural aircraft, photographed prior to delivery to a customer in India

Mohawk Air Services Mohawk 298, a 28-passenger conversion of the Nord 262

McDonnell Douglas F-4EJ Phantom II, of the type being produced by Mitsubishi for the JASDF

The prototype Kittiwake I in its current form, with Lycoming O-290 engine

M.J.5K2 Sirocco, with special wing fillets, built in 1974 by Ms Cottereau and Jurca

Nostalgia, an extensively modified Stolp Starduster Too built by Mr Will Neubert of Long Beach, California

Turner T-40B prototype, a conversion of the T-40A with tricycle landing gear 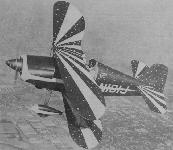 Armar I Gorrion 002 single-seat ultra-light aircraft, expected to be the first example of its type to fly

Fuselage of the Teruo Kago TK-1 homebuilt light aircraft, which was nearing completion in early 1975 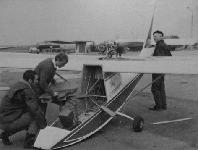 The 1/10th scale model of the Vliom photographed from the front, starboard side and above, respectively 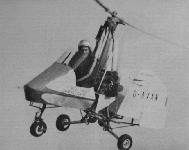 The former Weybridge man-powered aircraft, in current form as the RAF Cranwell Mercury

Barnett J-4B single-seat autogyro (85 hp Continental C85 engine). A fixed fin has since been added forward of the rudder

Artist’s impression of Beaujon Flybike. No photograph of the aircraft had been released for publication by the time this edition closed for press 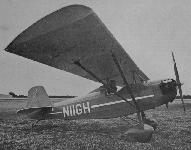 The prototype Parker Teenie Two, which has completed more than 200 flying hours

Saunders ST-27A, prototype for the new ST-28 transport developed by Saunders from the ST-27