Taylor J.T.1 monoplane G-APRT is now disguised as a "Yakovlev Yak 9D", and is seen taking off for its first flight in this form at Swansea Airport on May 29, 1977.

Taylor Monoplane prototype G-APRT, extensively rebuilt over the past three years to resemble a Yak-9, f/f at Swansea 29/5/77.

Three of the 29 Taylor Monoplanes completed in the United States, photographed at a Fly-in at Iowa 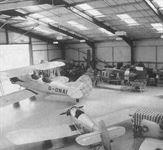