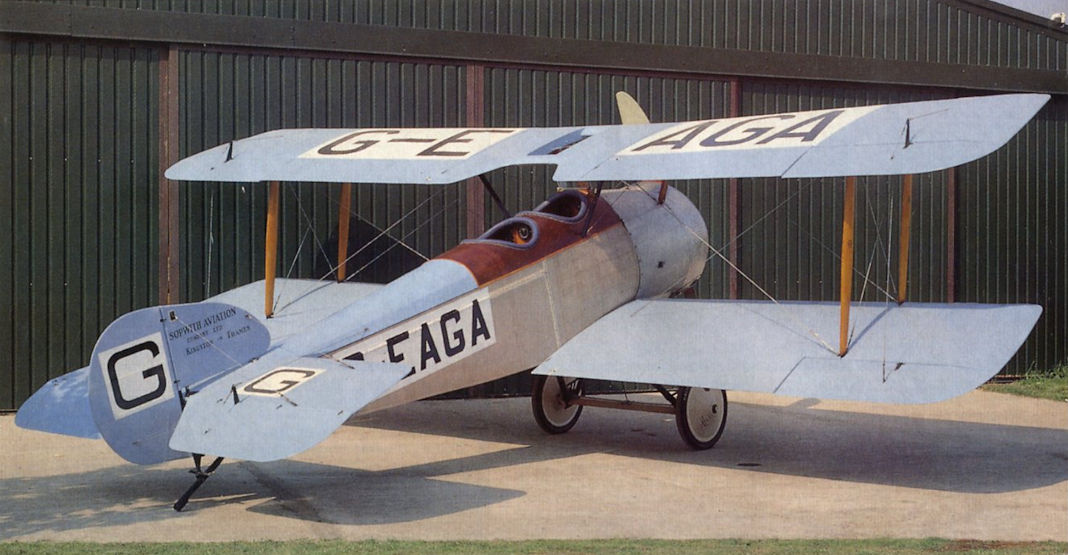 The "Dove" is primarily intended as a sporting two-seater tractor biplane, based on the famous Sopwith "Pup," whilst, if fitted with dual control, it is also particularly suitable for instructing pilots, who have passed their preliminary tests, before placing them on high-powered single-seaters. The engine is an 80 h.p. Le Rhone, and petrol is fed by gravity, thus eliminating all pressure "troubles." Both pilot and passenger are comfortably situated, possessing very good visibility. It has an excellent speed range, 35 to 100 m.p.h., and the low landing speed, together with the extra strong landing chassis, enables it to alight or get away from very small fields, etc. Except that the main planes are given a slight sweepback, the construction follows usual Sopwith practice, so that further description here is unnecessary. Fuel is carried for a period of 2 1/2 hours at a cruising speed of 85 m.p.h., and an adjustable tail plane allows of the machine being flown with the maximum comfort.

The stand of the Sopwith Aviation and Engineering Co., Ltd., is one of the most unique at the show, the four corner columns being formed by fuselages, while the "posts" are half propellers and the signboard is a long tail plane supported on two Sopwith fuselages. Three machines are exhibited: the small Dove, the Gnu, and the Antelope. The former is a development of the famous Sopwith "Pup," one of the most-liked aeroplanes of the war. In its new form, however, the machine is a two-seater, and the addition of the extra seat has necessitated a slight sweepback of the wings in order to get the centre of lift sufficiently farther aft to counteract the extra weight of the passenger. In other respects the Dove is to all intents and purposes identical with the Pup, and as the machine has a good top speed (95 m.p.h.) combined with the low landing speed of 35 m.p.h. it should soon become as popular for sporting purposes as was the Pup for war work.

Exquisite Sopwith Dove reproduction G-EAGA, newly completed for Roger Reeves by Skysport Engineering at their base near Sandy in Bedfordshire. The first flight was imminent as this issue went to press. 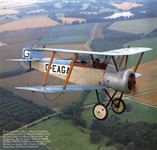 First air-to-air of Roger Reeves's Sopwith Done replica, built by Skysport Engineering and first flown on March 28 this year. Taken by MIKE VINES / PHOTO LINK on a sortie from Old Warden on August 20, it shows G-EAGA being flown by Stuart Goldspink.

A remarkable Sopwith line-up at the Sundown Flying Display at Old Warden on the evening of July 17, 1993. From left to right: AJD’s newly-completed Sopwith Camel G-ASOP/B6291 (which made its first post-rebuild flight on July 27); Sopwith Triplane "N6290"; Sopwith Pup N5180 and Sopwith Dove G-EAGA.

The Sopwith Dove evolved from the Pup fighter.

Sopwith Dove reproduction G-EAGA is taking shape at Skysport Engineering near Sandy, Bedfordshire. Being built to original Sopwith drawings for collector Roger Reeves, the Dove will befitted with dual controls - one of only three airworthy World War One-era aircraft in Europe to be thus equipped (Shuttleworth’s Avro 504K and a Morane Parasol in France are the others).