HOLLAND'S FIRST LIGHT 'PLANE CLUB: The example of Great Britain in forming Light Aeroplane Clubs is being followed in other countries. One of the latest to be formed is the "Rotterdamsche Aero Club, " and for a start two machines have been purchased. These are Pander biplanes of the type EC, fitted with 60-70 h.p. Walter engines. Their registration letters are H-NADV and H-NADW respectively.

AIR TOUR OF HOLLAND: The start from the Waalhaven aerodrome, Rotterdam. The first machine can be seen in the air.

FLYING AT WAALHAVEN: One of the Panders 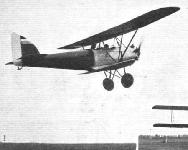 "OVER THE TAPE" AT ROTTERDAM: One of styles in the take-off tests - One of the Club Panders. 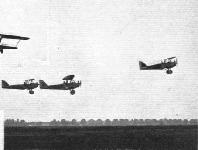 "FORMATING" AT ROTTERDAM: The three little Club Panders taking off.

AT THE ROTTERDAM LIGHT 'PLANE MEETING: The take-off and landing competition. 3. One of the Panders doing the landing.

The right spirit: Trying out each other's machines was a favourite pastime at Waalhaven. Lady Heath is here seen after a flight in one of the Pander machines. In the front cockpit is M. Schmidt Crans, and standing by the side of the machine, M. Slot, constructor of the Pander aeroplanes.

THE D.C.A. AT WAALHAVEN: Sir Sefton Brancker paid a visit to the Rotterdam Meeting on Sunday last, arriving with a party on a Fokker placed at his disposal by the K.L.M. He is here seen, in front of one of the Pander machines with, among others, M. C. Kolff, Miss O'Regan, M. Schmidt Crans and M. de Niet. 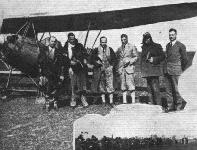 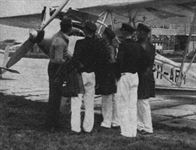 Ground instruction: A group of future K.L.M. pilots with one of the Panders used by the National Flying School.

A TEAM IN THE RELAY RACE: In the foreground, Lady Heath's "Cirrus-Moth." In the centre, the Demonty-Poncelet, and in the background one of the Pander machines.

Front portion of the Pander light biplane, showing seating accommodation, etc. This portion of the fuselage is of welded steel tube construction. Note the attachment for the single spar of the lower plane.

The tail of the Pander light biplane is partly of steel tubular construction. The tailskid is mounted on, and moves with, the rudder.

The Pander biplane, fitted with a D.H. "Gipsy I" engine, on which Mr. Van Tijen is to attempt a flight to the Dutch East Indies. It has an all-steel body, metal airscrew, and Bendix wheels and brakes. 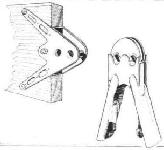