Imperial’s Handley Page fleet lined up at Croydon during a christening ceremony on March 30, 1926.

THE HANDLEY PAGE W.10: View inside the saloon, looking forward. There is seating accommodation for 14 passengers.

Short Calcutta G-EBVG was commissioned for the Channel Isles service on July 26, 1928.

Loaned from the Air Council for operational trials, Supermarine Swan G-EBJY was introduced on the Guernsey service on October 6, 1927. 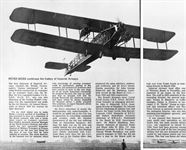 The one-off D.H.54 Highclere, G-EBKI, loaned to Imperial Airways for evaluation in 1926.