Vaindication of the flying-wing bomber concept - the Northrop B-2A Spirit. 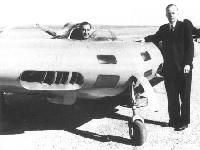 Test-pilot, Max Stanley, at left, with the crew of the XB-35, which made the first test flight of both the piston- and jet-powered flying wings.

Rear view of XB-35 revealing just how clean and drag free the design was. Housing over the propeller shafts offered enough area to counteract any yawing tendency.

Cutaway of the original XB-35.

Shown is the first of the two YB-49 jet powered conversions of YB-35s. This machine, 42.10236, initially flew on 21 October 1947. Powered by six 4.000lb s.t. Allison J35-A-15s, the YB-49's top level speed of 493mph at 20,000 feet may have been over 100mph faster than the piston-engined XB-35, but the thirst of these early jet engines can be gauged by the greatly reduced warload/range capability of 3.155 miles with a 10.000lb bombload. On 5 June 1948, the second YB-49 broke up in flight during forward centre of gravity checks killing all five crew members. Programme cancellation followed in 1949, resulting, according to a Wright Patterson assessment, from insurmountable instability problems. (Northrop)
The YB-49 in flight reveals fins, wing fences, intakes, elevons operating to bank the aircraft (note deployment at top of the wing) and pilot in his bubble canopy.

To channel air properly and act as a barrier against the spanwise (cross-wing) flow of boundary layer air, wing fences were built along the wing, runnig from the fins forward to an area just behind the leading edge.

The last of the Northrop flying-wings and the last to fly was the YRB-49A, a reconnaissance version of the YB-49. It featured six Allison J35-A-19s, four of which were buried in the wing and two hung in pods below the buried engines.

The first YB-49 taking off on its maiden flight. Leading edge waing air intakes were modified for the jet engines.

The YB-49 seen in profile while taking off was a deceiving view, indicating a much smaller machine than it actually was. As an example, the main gear wheels were 65in in diameter, without their tyres! 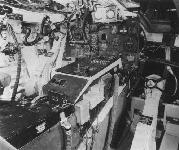 Cutaway of the YB-49 showing how clean the all-jet design was.