Virginia I J6856. The engine nacelles on this aircraft differed from all other Virginias. J6856 was converted to Mk III status in late 1924.

Virginia IV J7275. Issued initially to 7 Squadron in September 1924, it was retired from service (by then with the Royal Aircraft Establishment) in October 1935. The Mk IV was outwardly similar to the Mk III.

Virginia X K2329 of the Parachute Training Flight, Home Aircraft Depot, Henlow. The aircraft was one of four that took part in the last Hendon Air Pageant, 1937. Built in late 1931, it was resident at Henlow from 1932 until it was written off in a crash on take-off March 21,1940.

Evocative view of the aircraft taking part in the 1932 Hendon Air Pageant. The NIVO-painted Virginia X were putting on a display of skittle bombing.

Mk X of the Home Aircraft Depot, Henlow. A parachutist has just been pulled off, while another awaits his turn on the starboard side.

J6856 the first Virginia converted into a Mk VII, with ‘fighting tops’ for rear defence. 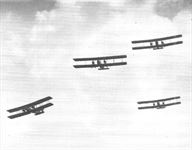 An atmospheric view of a Virginia X warming up its Lion engines at night on April 7, 1932 at RAF Worthy Down, the home of Nos 7 and 5 Sqn’s Virginias, showing excellent detail of the engine installation, radiators, undercarriage and flares under the wing.

The second Virginia III, J6993, as it appeared at the Hendon Air Pageant in June 1923. It was shown in the new types park as No 7.

Virginia VI, the equal dihedral on the wings is evident.

J7275 the second Mk IV and generally similar to the Mk III.

J6856, the first Virginia, just before the maiden flight. Note the small rudders, which gave a lack of directional control.

Two parachutists are pulled from a Mk X.

REFUELLING IN MID-AIR. TWO "VIRGINIAS" GIVING A DEMONSTRATION OF REFUELLING IN THE AIR: THE TOP MACHINE HAS JUST MADE CONTACT WITH THE LOWER. THE MAN IN THE TAIL COCKPIT HAVING SECURED THE END OF THE PIPE-LINE.
Mk X in the foreground refuelling a Mk IX during early trials, shown to the public at the 1931 Hendon display. 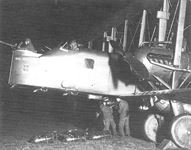 Trials underway using Virginia IX J8236 into the use of land catapults for launching heavily-laden bombers.

Another view of J6856, taken during 1927, during trials with 7 Squadron. The gunners are demonstrating the route to the ‘fighting tops’.

A Mk VII attached to a wheeled tail trolley for ease of ground handling. The short nose of this version is apparent.

Mk VI J7438 outside the hangars at Brooklands. 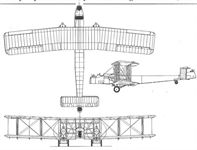 The fully metallised Mk X represented to the peak of Virginia development.