Первый экземпляр опытного десантно-транспортного вертолета Ми-18
The Mi-18 of 1980 had its fuselage lengthened to the front and rear of the main rotor.

A-7bis in the foothills of Tyan-Shan in Kirgizia in the spring of 1941 wearing civilian markings.

The same A-7bis SSSR-1338 with a ski undercarriage.

World’s first armed rotorcraft, the Kamov A-7. Note the Degtyarev machine-gun by the rear seat.

A group of designers, pilots and military personnel with the first A-7 autogyro. Nikolai Kamov is fifth from the left in a white shirt. Second from the left, is Mikhail Mil, who was then Kamov’s deputy, responsible for the aerodynamics of the A-7.

Two views of the A-7-3a autogyro after landing on the roof of the unfinished factory No.290 in Ukhtomskaya, 1941.

Mil V-12/Mi-12 very heavy transport helicopter. It reverted to the ‘Vintokryl’ format as the tip-jet V-7 had shown such little promise. 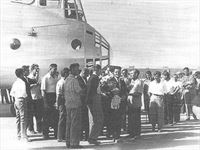 Pictured after the first flight of the series Ka-22 at Tashkent on September 23, 1961. In the centre, with the flowers, is pilot Yuri Garnayev, next to him is Dmitri Yefremov.

Kamov’s Ka-22 during the first and only public display over Tushino airfield in Moscow on July 9, 1961.

Rare air-to-air photograph of the Ka-22.

Kamov V-100 combat ‘Vintokryl’ design of the 1970s. Besides the two lifting rotors at the wing tips, it had a small pushing propeller at the rear of the fuselage. Note the Kh-27PS anti-radiation missile on the fuselage pylon and movable cannon above it. 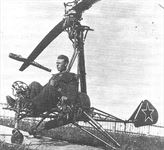 View of the SBIZh tip-jet helicopter of 1950. This never flew, although it passed all its captive tests.

Without having performed a free flight, the Mil V-7 now resides in the Monino Museum.