Hart Trainer K6421, complete with tropical radiator, at El Kabrit, Egypt, on January 2, 1943.
Hawker Hart IIA Trainer K6421, built by Armstrong Whitworth, was one of a dozen which were tropicalised from a batch of 140, the tropical radiator being visible between the undercarriage legs. A generously large windscreen has been fitted to the rear cockpit. Built in the mid-1950s, this aircraft had a Rolls-Royce Kestrel X engine.

The Tropicalised Boulton Paul Defiant TT Mk 1 AA591, is seen at Tezgoan, India, on June 14, 1944. Converted to a target tug from a Mk II in 1943, it was struck off charge in June 1945 and then went to the Indian Air Force. The slipstream-driven winch propeller is visible behind the rearmost transparency, swivelled into neutral position. The drogue targets were housed in the fairing forward of the tailwheel.

After being re-engined with Wright Cyclone engines - identified by the shorter chord of the cowlings - the Ensigns were painted in a uniform type before being transferred to the Middle East for service with BOAC. These pictures show the camouflaged upper surfaces and the civil registrations, which were retained together with the BOAC "Speedbird" emblem and aircraft name on the nose.
Armstrong Whitworth A.W.27 Ensign G-AFZU Everest at Heliopolis, Egypt, in 1943. Everest survived being shot up by a Heinkel He 111 over Biscay during a ferry flight on November 9, 1941, and had logged 2,406 flying hours when il was finally scrapped at Hamble in April 1947. It was used on a shuttle service linking East and West African ports.

Blackburn Roc fleet fighter L3183, another of HMS Phoenix’s complement, was photographed on November 28, 1942. This aircraft was delivered to No 8 MU, Little Rissington, in June 1940. The Roc was the first turret fighter to serve in the FAA. 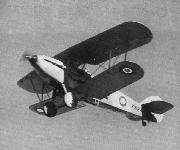 Hawker Audax K3124 at El Kabrit, Egypt, early in 1943. The Audax was an army co-operation variant of the Hart, but by the time this picture was taken the type was relegated to "general dogsbody" duties.

No.815 Squadron served in Egypt during 1943, with a series of detachments. Blackburn-built Mk.I V4697 is illustrated at Fayid in June 1943 - the unit disbanded the following month.
Also based at HMS Phoenix was this example of the Albacore’s famous forbear, Blackburn-built Fairey Swordfish I V4697. It was photographed at Fayid on November 16, 1942.

Fairey Albacore I torpedo-bomber T9171, c/n F4960, flying from RNAS HMS Phoenix, located at Fayid, Egypt, returns to base during November 1942. Note the ASV (air to surface vessel) radar aerials on the forward interplane struts and aft of the engine cowling.

Another Phoenix-based Albacore I, X8980 of No 826 Sqn, bearing codes S4K and black undersurfaces for night intruder missions, seen at its base in Egypt on November 14, 1942.

Avro 652A Anson Mk 1 DG766, was photographed at El Kabrit on January 14, 1943. This aircraft was built at the Newton Heath plant of A. V. Roe, most of the machines in its batch going to the Empire Training Scheme.

An anonymous Vickers Valentia troop carrier at Heliopolis in 1943. The Valentia was developed from the Victoria, and could accommodate 22 troops.

De Havilland D.H.82A Tiger Moth II EM918, was built by Morris Motors and is seen in service with the Indian Air Force at Comilla, India, on August 1944.