Обломки египетского "Спитфайра", сбитого над Рамат-Давидом.
The wreckage of a REAF Spitfire which crashed near kibbutz Ruhama in the Negev Desert, photographed in November 1948. The Israelis used to salvage spare parts from the shot down Egyptian examples to keep their own Spitfires flying and fighting. It has been claimed that this is REAF Spitfire V 601 and that this example, flown by W/C Al-Yanzury, was shot down by ‘Modi’ Alon in a S-199 on July 18,1948 but to the best knowledge of this author this claim is not confirmed. 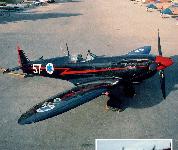 Still airworthy in Israel and kept by the IDF/AF Museum, Spitfire LF IXe ‘57’ has the civilian registration 4X-FOG, but was built as TE554. Not a ‘1948 Vintage’ machine, becoming 2057 with the IDF/AF, it nevertheless richly deserves illustrating!

Этот "Спитфайр" Mk.IX израильтяне использовали для ведения разведки
A Spitfire ‘10’ was the first Israeli Spitfire D-130 and later 2001. It was probably photographed at Hatzor air base in late 1948 or early 1949.

Two of the Spitfires en route to Israel on December 23,1948. Note the open canopy of the nearest Spitfire which might be 2009.

In mid-1949 101 Squadron moved to Ramat-David air base where this photo was taken. Parked nearest to the camera Spitfire 2003 arrived at that same air base from Czechoslovakia in September 1948.

REAF Spitfire 664 being towed along the Abu Ageila-Nitzana road by its Israeli captors. Probably photographed from an RAF Spitfire FR.XVIII on January 1,1949.

Spitfire 2016 ‘21’ in a low level pass over Hatzor air base in 1949. This particular aircraft had a short but colourful career in IDF/AF service. It was ferried to Israel by Aaron 'Red' Finkel on December 26,1948 and entered 101 Squadron service on January 5,1949. Two days later it participated in the air combat versus RAF Tempests but on September 28, 1949 test pilot ‘Sy’ Feldman had to bale-out of 2016 after a fused bomb refused to depart its bomb carrier during a bombing test. It was the first successful bale-out in the history of the IDF/AF

Spitfire 2015 ‘23’ was ferried to Israel by ‘Sandy’ Jacobs on December 30,1948 but failed to participate in the Israeli War of Independence as it only entered 101 Squadron service in February 1949. It has been reported that this aircraft was lost in an accident in July 1949.

Camouflaged Spitfire ‘12’ parked in a line-up of bare metal finished Spitfires at Ramat-David air base where the wheels of Spitfire D-132 - which became 2002 ‘12’ - first touched on Israeli soil in September 1948.

A weathered camouflaged IDF/AF Spitfire in the early 1950s still carrying the Operation ‘Velveta 2’ badge of a stork delivering a Spitfire.

One of the first five Israeli Spitfires having an engine run under a camouflage net at Hertzeliya in the summer of 1948.

Spitfire SL632 was IDF/AF 2011 flown by 'Dani' Shapira in Operation ‘Velveta 2’. It is seen here in Yugoslavia wearing Yugoslav Air Force markings which were used for the flight from Czechoslovakia as demanded by the Yugoslav authorities

Spitfires ‘17’ and ‘18’ photographed by David Farer just under the wing of the escorted B-17.

REAF Spitfire 664 after its undercarriage was retracted by mistake en route to Israel. While being towed to Israel by a truck it began to close the distance on the towing truck and - the legend claims - the horrified air cadet in the cockpit pulled the retraction lever which he mistook for a hand brake.

Israeli servicemen pose with F/L Barakat’s Spitfire on the coast of Hertzeliya in May 1948.