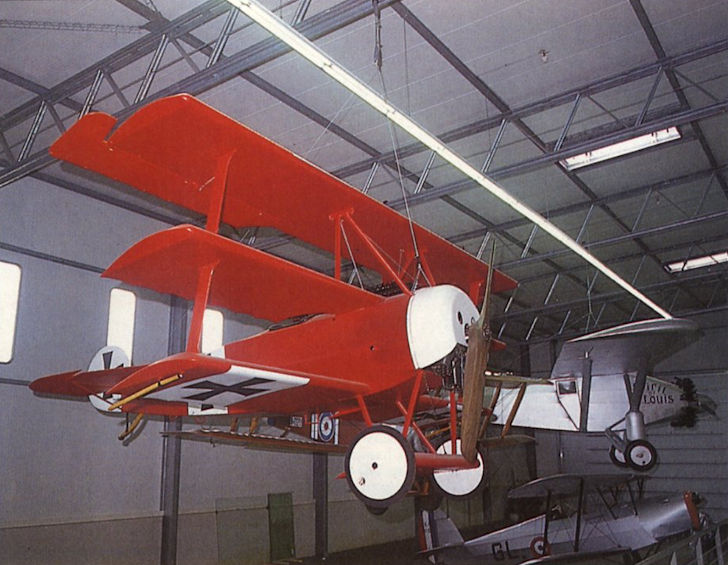 ”THE SPIRIT OF ST. LOUIS"
The Ryan Monoplane Described 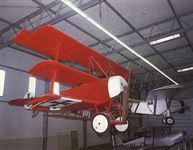 Fokker Dr I and Ryan NYP replicas in the first of the Luftfahrtmuseum Laatzen-Hannover's two exhibition halls, with a Stampe visible at lower right.

THE NEW YORK - PARIS FLIGHT: The Ryan monoplane "Spirit of St. Louis," fitted with a 220 h.p. Wright "Whirlwind" engine, on which Capt. Charles Lindbergh flew from New York to Paris in 33 1/2 hours.

THE RYAN MONOPLANE: Three-quarter front view. Note the strutting of the undercarriage.

THE "WRIGHT SPIRIT": View of the business end of the Ryan monoplane "Spirit of St. Louis," on which Capt. Lindbergh flew from New York to Paris. Note the neat cowling around the Wright "Whirlwind" engine, spinner over the boss of the Duralumin propeller, and particularly the unusual undercarriage arrangement.

One of the two converted Ryan Broughams at Roosevelt Field, N.Y.: 'Spirit of St. Louis'.

Forty years on, and history repeats itself. A replica of the Spirit of St. Louis is seen at Le Bourget on May 24, 1967, commemorating the 40th anniversary of Lindbergh’s Atlantic crossing.

"THE SPIRIT OF ST. LOUIS": View from the air of Capt. Lindbergh's transatlantic machine during a test flight. The machine was designed by Mr. Donald A. Hall, chief engineer and designer of Ryan Airlines of San Diego, California.

THE RYAN MONOPLANE: This view of the machine in flight shows most of the special features. Particularly so as regards the undercarriage, the complete strutting of which is visible. Note also the side window.

Charles A Lindbergh was flying the Ryan NYP "Spirit of St Louis" when this photo was taken during an early test flight over San Diego in May 1927.

"THE SPIRIT OF ST. LOUIS" SHOWS ITSELF: Before attempting to land on the few feet of Croydon Aerodrome available, Lindbergh made several circuits, and this was about as much of him that the majority of the people saw! These two views give a good idea of the general lines of the Ryan monoplane (220 h.p. Wright "Whirlwind") that has made history.

LINDBERGH LANDS: Two views of "The Spirit of St. Louis" alighting in the narrow path left for it by the crowd, which can be seen, in the top picture, surging forward.

HERO WORSHIP: Some of the 100,000 or more visitors to Croydon last Sunday who gave Lindbergh such a wonderful reception. The "unloosed" crowd is seen making for "The Spirit of St. Louis" - the wings of which are just visible above their heads.

THE RYAN MONOPLANE. Side view.

THE NEW YORK - PARIS FLIGHT: Capt. Charles Lindbergh, Legion of Honour, who piloted, single-handed, his Ryan monoplane 3,600 miles across the Atlantic, from New York to Paris. This photograph was transmitted by telephone wires from St Louis to New York.