SPECIAL interest attaches to the latest production of the Avro Co., which has just successfully gone through its trials at Hamble, inasmuch as it revivifies the early activities of this pioneer firm, when Mr. A. V. Roe ДальшеMore>>> produced - if not originated - the tractor triplane type of machine. As Mr. A. V. Roe has always been a great believer in the triplane, it is but natural that his firm should have further developed the type.
This new Avro, known as type 547, is seen in the accompanying photograph and scale drawings. It is a purely commercial machine, and is intended for passenger, cargo, or mail work. Accommodation for four passengers, in addition to the pilot, can be arranged for, whilst for cargo or mail work removal of the seats gives a space of 113 cubic feet. In general appearance the machine follows familiar Avro lines, which may, perhaps, be accounted for by the fact that it is built largely from parts of the standard type 504K Avro biplane. Incidentally, this is quite an important feature, not only making for cheap production, but greatly facilitating the maintenance of the machine, as there should be no difficulty in obtaining spares almost anywhere.
The fuselage is on more or less conventional lines, and is extra deep to allow for the provision of a cabin for the passengers. This is located immediately aft of the rear main plane spars, and is fitted up somewhat on the lines of a railway carriage, the seats being arranged for two passengers facing forwards and two rearwards. Access to this cabin is by means of a door in the side of the fuselage, whilst large Triplex windows on either side provide an excellent view for the passengers.
The pilot is located well back along the fuselage, at the rear of the cabin, with his head projecting above the top of the fuselage. From here he has an excellent view in all directions, which, it is claimed, is aided considerably by the triplane arrangement.
A 160 h.p. Beardmore six-cylinder vertical water-cooled engine is installed in the nose of the fuselage, where it drives a tractor screw. A comparatively low petrol consumption is obtained with this engine - in this particular case 9 miles to the gallon with five up and cruising at 80 m.p.h.
All three main planes are of equal span, 37 ft. 3 ins., and chord, 4 ft. 9 3/4 ins. They are set at a dihedral angle of 2 1/2, but have no sweep back or stagger. Ailerons are fitted to all three planes, those on the middle ones being balanced by means of a small surface mounted forward of and above the leading edge of the aileron - a practice employed by the Germans during the War on large multi-engined bombers.
The landing chassis is of the standard Avro type, whilst the rest of the machine appears to be on more or less standard lines, and does not, therefore, call for special comment.
The principal characteristics of the Avro 547 Triplane are as follows:-

The "Avro Commercial" Type 547 triplane, with 240 h.p. Siddeley "Puma" engine, designed purely as a commercial machine, is built on distinctive Avro lines, and many of the parts are interchangeable with those on the standard training machine. This permits of very low production costs and facilitates the maintenance of the machine as all parts subject to wear or damage can be replaced from stock. The pilot is seated well back where he has a clear view for landing or taking off. Between the two lower planes a roomy cabin is situated and fitted exactly like a railway compartment, to seat four passengers - two facing forward and two backward. A large side door gives easy access and triplex glass windows allow a clear view of the country below.
The seats may be instantly detached, and stowed away in a locker, leaving a clear space of 113 cubic feet for cargo. Special attention has been paid to heating, lighting and ventilation, thus making the machine ideal for long passenger flights.

Of the three machines exhibited probably that which attracts greatest attention is the triplane, type 547A. This machine, which has the great advantage, from a commercial point of view, that it is built of standard Avro parts, and that, therefore, replacements are facilitated, has a very comfortable cabin. In fact we are inclined to think that, from the point of comfort, it is the best cabin in the show. Not only is the upholstery excellent, but there is plenty of leg and elbow room. The cabin is entered through a door in the starboard side, and on the port side there is a dummy door which helps to retain the symmetry and gives the impression of a first-class railway carriage. The windows in the door and dummy are of the raising type, further adding to the similarity to a railway compartment. The four passengers sit facing one another, two side by side on each seat. As already mentioned, there is plenty of room for legs and elbows, and the seats are extremely comfortable, so much so that a show-weary visitor was seen taking a nap in the quiet of the cabin. One hopes that he had pleasant dreams of long-distance flights over exquisite scenery. The ventilation of the cabin has been very well looked after. Not only are there circular ventilators of the ordinary type in the roof of the cabin, but there is also a sliding panel which can be opened either to admit fresh air or to allow one of the passengers to put his head outside and - have a look round! At the foot of the dummy door on the port side there is a further heating and ventilating arrangement with two levers operating hot and cold air admission to the cabin. Either can be on or off. A little flap door in the upholstery of the aft seat enables the passengers to see and speak to the pilot, who is seated aft of and slightly higher than the aft bulkhead. Two lights in the roof of the cabin allow the passengers to read if the weather be very dull or during a night flight. A refinement which is not usually found, but which is extremely useful, is the provision in the cabin of two instruments: an altimeter and an air speed indicator. By means of these the passengers can keep themselves informed of what is going on, or as much as is of interest to them. As the speed is, of course, the air speed, one can imagine passengers having little bets on the probable duration of the journey, much as do passengers on a liner.

As this is the machine exhibited at the recent Olympia Aero Show, and described in our columns at the time, no very detailed reference to it is required here. The chief feature of the machine, it may be remembered, is that it is built of standard Avro parts throughout, a fact which greatly reduces first cost and facilitates replacements of broken or damaged parts. It is a vertical triplane, designed for carrying four passengers in addition to the pilot. The cabin, in which the passengers sit in pairs vis-a-vis, is extremely comfortable, and great care has been taken to ensure, not only thorough ventilation, but also the maintenance of an agreeable temperature. The pilot sits aft of the cabin, on the port side, with his head projecting above the flat top of the fuselage.
The engine is a 240 h.p. Siddeley-"Puma," with which the machine has the following performance, carrying full load: Speed, ground level, 98 m.p.h.; at 3,000 ft., 95.5 m.p.h.; at 5,000 ft.. 92.5 m.p.h. Economical cruising speed at 1,000 ft., 83 m.p.h. The climb is as follows: To 1,000 ft., 1.9 mins.; to 5,000 ft., in 10.2 mins., and to 10,000 ft. in 28 mins. The power loading is 1583 lbs. per h.p., and the wing loading 7.63 lbs. per sq. ft. The landing speed is about 52 m.p.h. The petrol consumption at 85 m.p.h. cruising speed at 1,000 ft. altitude is 12 gallons per hour. Our photograph shows an earlier model, but these are no great alterations. 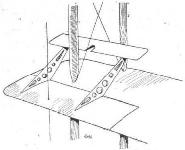 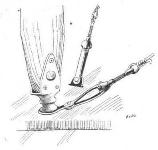