The Sukhoi Su-27, one of the most important aircraft in front-line service with the Soviet air forces today, provided a highlight at last month's Farnborough International 90 flying display.

This view of an Su-27 pulling away shows clearly the variable-area convergent-divergent jet-pipe nozzles at minimum aperture and the array of wingtip, underwing and under-intake stores pylons and rails. 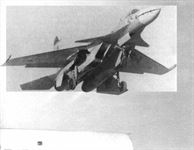 Опытный Т-10-24 взлетает с трамплина комплекса НИТКА
An experimental Su-27, T.10-24, with canards for enhanced agility and STOL trials, which, first flown in 1985, was fitted with two-dimensional thrust-vectoring nozzles in 1988

A canarded navalised Su-27 which performed trials aboard the carrier Tbilisi in the Black Sea last year.

The tandem two-seat Su-27UB, the prototype of which is believed to be illustrated here, retains full combat systems - unlike the two-seat version of the MiG-29 - including the massive pulse-Doppler radar, for operational use, but the loss in fuel capacity resulting from insertion of the second cockpit reduces range by about 1 000 km (620 mls).

The Su-27UB demonstrator flying low and slow, and displaying its dorsal air brake

The Su-27UB demonstrator immediately prior to take-off. The Sukhoi fighter obviously places much emphasis on ability to operate - or escape - from bomb-damaged runways by virtue of good take-off performance and foreign-object protection grills for the engines.

The instrumentation of the Su-27UB forward cockpit looks somewhat dated, but is undoubtedly effective. The very tall HUD combines radar and IR inputs from a 120-deg scan with other air data, and is flanked by twin sockets for the helmet sight. Visible are the leg-restraint pads and the combined K-36DM seat harness.