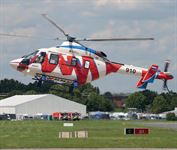 Cora, designed and built by Kitty Hawk Corporation, is one of dozens of electric aircraft projects.
Passengers will fly on Wisk's Cora air taxi during trials in New Zealand.