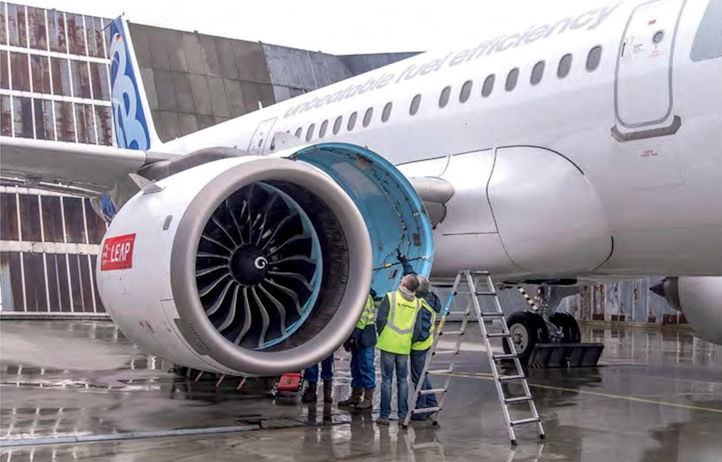 Many new commercial aircraft engines have been hit by development or in-service snags, forcing manufacturers to retrofit upgraded parts to their powerplants.

The A321LR, designed to be capable of flying non-stop between Europe and the United States, has been certified and its A350-900ULR stablemate has been delivered.

The Airbus A321LR, which flew on January 31, 2018, is a higher-capacity and longer-range A321neo variant designed to serve transcontinental and transatlantic routes.

A321LR test aircraft D-AVZO (msn 7877) at Mahe in the Seychelles ahead of a 4,750-nautical-mile flight to Toulouse in April 2018, flown to test and demonstrate the subvariant's range capability.
The Airbus A321LR, the long-range version of the A321neo due for service entry later this year, recently undertook a 4,750 nautical mile (8,797km) flight from Mahe in Seychelles to Toulouse as part of the variant's 100-flying-hour certification testing programme. Airbus said this is a new distance record for a single-aisle narrowbody. The flight followed A321LR hot weather testing performed at Sharjah International Airport in the United Arab Emirates. The A321LR's certification and service entry is expected later this year.

Air Astana will use seven A321 LRs on new routes to Europe and within Asia.

Arkia Israeli Airlines was first to introduce the A321LR with 4X-AGH (msn 8517). Further developments of the A321 to add payload and range are possible, Airbus says.

Nine Airbus A321neos have been delivered from an order for 85 jets.

The first A321neo for low-cost carrier Primera Air, OY-PAA (msn 8145), departs Hamburg. Airbus is assessing the potential of ramping up A320 production to up to 70 jets a year.

Turkish Airlines was the initial customer to opt for Cabin-Flex in its A321neo, receiving TC-LSA (msn 8155, formerly D-AZAQ) in July 2018.

Wizz Air Abu Dhabi was due to launch flights in October 2020, but is now reported to have delayed this until at least mid-November

This is the first A321 to have ACF, which removes Door 2 just ahead of the wing and adds new over-wing exit

Sign of the future: Airbus has started A321XLR production

The social area of the Four Seasons' A321LR cabin has been created by Airbus Corporate Jets in partnership with the hotel company.

A representation of the seating area designed for Four Seasons’ A321LR cabin.

The interior of Vistara’s Airbus A321neo

The Airbus A321XLR, launched in June 2019, is due to enter service in 2023 and will be the longest-range single aisle airliner.

Efforts to rectify issues with the Boeing 737 MAX has meant the company has further delayed a potential launch for its New Midsize Airplane. Meanwhile, Airbus has recorded almost 500 orders for its A321XLR offering since June.
Airbus’ newly launched A321XLR will have the longest range of any single aisle airliner.

With its recent order for 50 examples, AirAsia X has taken orders for the A321XLR above the 200 mark.

Airbus states the A321XLR will offer “30% lower fuel burn per seat than previous-generation competitor aircraft." JetBlue has chosen the airliner to begin transatlantic services.
The airline has converted 26 of its 85 Airbus A321neo orders to take advantage of the increased ranges offered by the A321LR and XLR variants.

Norwegian has switched 30 of its A320neo orders to the A321LR variant.