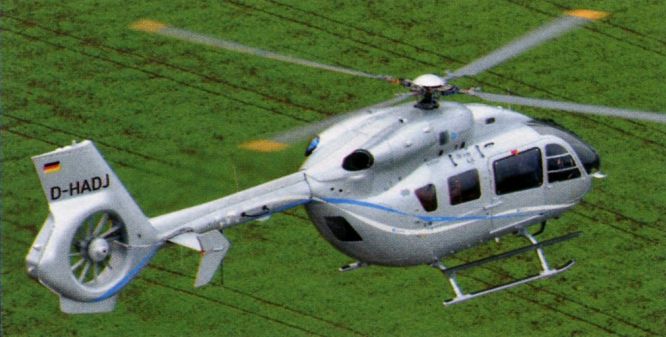 The H145 was presented to civil and offshore operators in Brazil during a month-long sales tour.

Airbus says its manned-unmanned teaming capability demonstrated with an S-100 and H145 can be implemented in any kind of helicopter and interact with all types of unmanned systems.

In its latest form, the ACH145 features an advanced five-bladed main rotor

The Airbus Helicopters H145, fitted with a five-bladed main rotor, pictured on the 22,840ft summit of Mount Aconcagua on September 25, 2019.

Airbus Helicopters EC145T2 D-HADF (wearing its test registration D-HADO) was the first of the variant to be delivered, going to DRF Luftrettung.

AIRBUS HELICOPTERS announced on May 2, 2018, that it had delivered the 200th production H145M helicopter to Norsk Lutfambulanse (NOLAS) at the end of April.

At 91m, the H145's Goodrich rescue hoist cable is twice as long as the Huey's. Paired with the greater twin-engine power, it is possible to winch in rough or high terrain

The mission qualification training of the H145 includes low-level flying and confined area landings. Crews undertake daily training missions out of Niederstetten Air Base in Baden-Wurttemberg

With its side sliding doors and a large rear clamshell door, the H145 offers plenty of space for loading and unloading patients

Five of the 15 H145Ms that will be operated by the Luftwaffe on behalf of the Kommando Spezialkrafte Bundeswehr (KSK) in the special forces role have now been delivered.

A Sikorsky CH-53GS of HSG64 and a Special Operations Forces Airbus H145M light utility helicopter of the same unit circle over Norvenich on September 9, 2020

Two H145Ms from the Luftwaffe's Hubschraubergeschwader 64 based at Holzdorf formed part of the Bundeswehr flying demo.

The Airbus Helicopters H145 has entered service with several HEMS operators in the UK including the Yorkshire Air Ambulance, which has two aircraft.

A piper welcomed Gama Aviation into Inverness in the traditional manner. 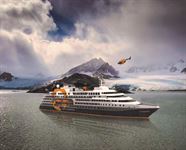 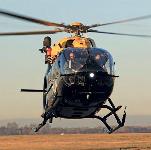 One of the three H145 Jupiter HT1s that are part of the UKMFTS contract.

The first of Swiss Air-Rescue Rega's new H145s will become operational from the company's base in Bern in October 2018.
Serbia 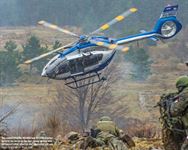 Two Airbus H145Ms, YU-MED and YU-SAR inserted some of the forces by the fast roping method and performed rather effective and aggressive pull-ups 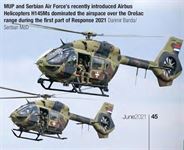 Serbian Air Force H145M 14501, the first of nine on order, was handed over at Airbus Helicopters' Donauworth facility on November 23, 2018.

The first of nine Airbus Helicopters H145M helicopters was delivered to the Serbian Ministry of Defence in Belgrade on June 26, 2019.
Hungary

HForce-configured H145M D-HADX at Papa Air Base, Hungary during firing trials that included a 0.50 calibre FN Herstal HMP400 podded machine gun (on the right of the image) and 2.75-inch unguided rockets from an FZ231 launcher (on the left).

Hungary becomes the latest customer for Airbus Helicopters’ H145M, which was first delivered to Germany's Bundeswehr in 2015 and has subsequently also been ordered by Serbia and Thailand. 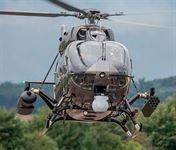 The first H145 in Japan, JA903H in the colours of the Doctor-Heli EMS network.
Thailand

Airbus Helicopters handed over the first two H145M helicopters to the Royal Thai Navy on April 29, 2016.

The five H145Ms ordered by the Royal Thai Navy in September 2014 are due to be delivered by the end of this year. The first two were handed over at Airbus Helicopters' facility in Donauworth in the spring, and remain in Germany for pilot training.
Army's Project Land 2097 Phase 4 will see the acquisition of at least 16 helicopters for Special Operations support Airbus Helicopters' H145M and Boeing’s AH-6i Little Bird are two contenders.
New Zealand

The two H145s recently delivered to New Zealand Emergency Medical Services represent the first of the type to be sold for the EMS role in the country.
Canada

AIRBUS HELICOPTERS has delivered the first H145 to the Royal Canadian Mounted Police (RCMP), the company announced on December 19, 2018.
Argentina

The H145 meant a big improvement for the force in terms of technology. As with the other EC145 it's used for a wide variety of missions, including patrol, transport, medical evacuation and firefighting.

The H145 of the Federal Police flying over their main heliport in the harbour of Buenos Aires. 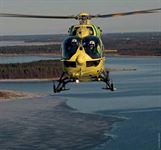 AIRBUS HELICOPTERS announced further successes for its H145 helicopter in September 2018, with orders from Aramco Overseas Company and the Philippine Coast Guard for a total of six aircraft.

The first of two ACH145 corporate helicopters has been delivered to an undisclosed customer, for operations aboard super yachts in the Caribbean and Mediterranean.

The H145 helicopter fitted with a five-bladed main rotor will offer customers an extra 150kg (330lb) of useful load.

A Dillon M134D Gatling Gun is among the standard weapons on the H145M.

Weapons currently cleared for carriage on the removable pylons attached to either side of the cabin include the 12.7mm FN Herstal HMP400 gun pod and/or Forges Zeebrugge FZ233 7-shot lightweight rocket pod. 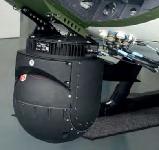 A laser designator will be integrated into the nose- mounted Wescam MX-15HD electro-optical system, enabling a range of future laser-guided weapons to be used.

Our helicopters are a flying life support system for paramedics and rescue services. Always on call to reach casualties of accidents and disasters or evacuate critical care patients. Prescribe an EC 145 T2.

Three H145Ms are being acquired to replace Bell 212s. The H145Ms will be used for maritime training at RAF Valley.