An inspection (possibly by V K Lavrov, later Chief of the Red Air Fleet Staff) of what appear to be new R-1s. The occasion may have been the handing over of aircraft to one of the ‘Lenin’ squadrons. The old Tsarist extended salute is retained.

A typical scene so beloved of aviation artists who firmly believe that Russia is forever covered in snow. However, it does serve to illustrate the often harsh conditions in which these aircraft operated in some parts of the USSR.

This machine has no propeller boss dog for Hucks starting.

The observer’s cockpit and gun ring - the compass is also non-Russian. The item on the left seems to be a simple bombsight (not a Goerz) with a drift indicator. The type Tur-43 was a Soviet adaptation of the Scarff No.2 but with a spring-loaded action to assist the observer in turning the gun into the slipstream. Basic dual control equipment was standard on the R-1.

The pilot’s fixed type PV-1 gun, note the type Pul.9 synchronising system (the cable running into the bottom front of the breech casing). The collector box under the gun received the empty belt (or disintegrating links) and the frontal angled tube led the empty cartridge cases into the same collector box. Like the Vickers, a large cocking handle is fitted, indeed the PV-1 was developed in the same way as the Vickers, it was basically the ground Maxim which was converted to air-cooling. It more or less equated to the British Vickers Mk.II aircraft gun.

The pilot’s dash indicates a selection of instruments typical of the period, all the characters are in the Cyrillic alphabet with the exception of the compass which appears to be British.

An R-1 forced to land in Polish territory and so enabled a thoroughly detailed examination and photographic record to be carried out.

Showing signs of the damage suffered in its nose-over, the captured R-1 reveals at least one of the later modifications such as the doubling of the undercarriage wiring. Note the ‘dog’ on the prop boss for starting with Hucks system.

Skis were a necessity in many parts of the USSR and the drawing shows the standard form including the small tail ski. Elastic cables held the skis in the position shown whilst in flight.

A standard R-1 with full armament and underwing bomb carriers and the extra radiator under the nose. The aircraft number shown was typical and the red star with black outline and black circle was a common variant during the 1920s and 1930s.

A British-built DH.9 most probably abandoned by the ’Whites’ (note the Vickers machine-gun). The RAF roundels have been overpainted in their original positions - a useful clue when trying to identify early Soviet aircraft. This aircraft belonged to Budyonny’s 1st Cavalry Army circa 1920.

D.H.9 российской сборки с двигателем "Сиддли Пума" и радиаторами типа "Хазет"
A DH.9 (Siddeley Puma) operating in Central Asia against the Basmachi tribesmen 1924/25. This aircraft and probably most of the others in the unit were purchased from Britain in the early 1920s. It is sometimes difficult to sort out the purchased DH.9s from the Soviet R-2 copies or more confusingly possible and probable hybrids. Note the ancient ‘Hazet’ style radiators (original German design dating back to 1913) which indicates one particular shortage at the time. The overhead netting was not for camouflage but to provide a modicum of shade in the hot dry climate.

A DH.9 operating in Central Asia in 1924-25, one of a number of these Siddeley Puma-engined aircraft purchased in the early 1920s. Documentation sometimes makes it difficult to differentiate between British-built aircraft from the Soviet R-2 copy. This and some others in this group had the original serials painted on the cowling clearly identifying it as one of a batch of 350 built by the Alliance Aeroplane Co of Hammersmith, London, in 1918. Photographs suggest that these aircraft were painted an overall pale grey with red (?) lightning flashes.

A British-built DH.9a photographed at Petrovsk in 1919, note Vickers FB.19 (Mk.I) in background at right.

A British-built DH.9a photographed at Petrovsk in 1919, note Vickers FB.19 (Mk.I) in background at right. 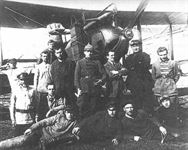 One of the Fiat-powered DH.4s photographed on the day of its test in 1920. Note that DH.9 nose contours have been adopted. The radiators are of the old Salmson box type. The test pilot B I Rossinsky is seen second from the right (standing).

The first Soviet ‘DH.4’ built by GAZ-1 (previously the Duks factory) in Moscow, only 20 were completed.

The R-2 R-RMPB powered by a Siddeley Puma engine which took part in the Moscow-Peking flight of 1925. The crew seen here are: pilot A I Yakatov and his companion technician F P Malikov.

A general arrangement drawing of Polikarpov’s attempt to update the basic R-1. However, the performance was not impressive and the project was abandoned. In any case the real successor to the R-1, the R-5 was already under development. Polikarpov’s signature can be seen bottom right

Опытный образец МР-1 N 3030 с металлическими поплавками Мюнцеля. Октябрь 1926г.
The Munzel-type all-metal floats were superior to the original wooden ones but a limited supply of corrugated aluminium at the time prevented them from being fitted across the board. Note the covered PV-1 gun and the under-fuselage bomb carriers which have been moved back.

The ‘Amur’ was a converted river gunboat with a huge barn-like hangar mounted on the after hull. It became a unit of the 68th Independent Air Division and part of the Amur River Fleet. It is seen here in 1929 during the conflict with China with one of her MR-1s apparently being serviced. Trees and shrubbery are festooned around the hangar and the Soviet naval jack flies from the roof-inounted after bridge. 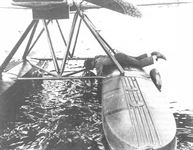 Техник снимает колеса перекатного шасси с МР-1
Attaching the dolly wheels to the floats of an MR-1. The original standard floats seen here were of wood and appear to have been largely influenced by German design.