THE FEMALE OF THE SPECIES. This fine photograph of the first production Hawker Hind light bomber being flown by Mr. M. Summers was secured by Flight's chief photographer from the Hart "MR," with Mr. J. S. Hindmarsh as pilot. The Hind, a development of the Hart, is fitted with ths fully supercharged Kestrel V engine of 600/640 h.p. (700 h.p. for takeoff) and does nearly 200 m.p.h. with full military load at 14,000 ft. Note the Demon-type rear cockpit and the tail wheel.
The first production Hawker Hind, K4636

Sir, With regard to your feature on the Southern Martlet, I enclose two prints of Martlet ’AYX at Woodford in May 1969, when it was to be restored by someone in the Merseyside/Wirral area - I gather nothing came of it. Perhaps someone can advise of its present whereabouts and status. <...> 1 Hollythorn Avenue, G. A. JENKS

BAC Provost T-5A photographed from another Provost by Arthur Gibson. 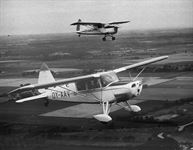 The first War Aircraft Replicas half-scale Focke-Wulf 190 to fly outside of the USA. Registered G-WULF, it is based at Elstree and owned by S.B.V. Aero Services.

Recent newcomer to the British civil register is this D.H.60 G-ABEV, photographed over Denmark earlier this year by TORKILD BALSLEV.