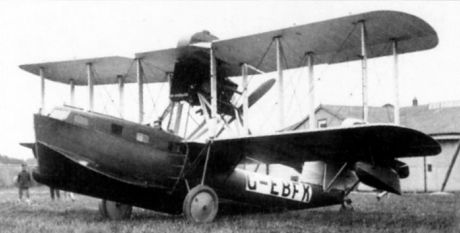 A NEW "SUPERMARINE" FOR SPAIN
Bombing Machine Passes its Tests

THAT the merits of Supermarine flying boats are appreciated also outside the British Empire is amply proved by the number that has been in service in some of the remotest corners of the world. Everywhere one hears good reports of these seaworthy flying boats, and quite recently a large order was, we understand, received from a foreign government much nearer home. Spain is on the look-out for suitable machines to employ along her long coast line, and it is not strange that, after thorough investigations and the witnessing of flying tests, the order to which we have referred was placed with the Supermarine Aviation Works of Southampton. Naturally, one is not at liberty to go into too minute detail, but it may be stated that the machines ordered are to be used as bombers, although they also carry photographic outfits.
The new Supermarine, of which the first was tested over Southampton Water by Capt. Biard on May 21, is of the amphibian type, and is fitted with Rolls-Royce "Eagle IX" engine, driving a "pusher" airscrew. Pilot, gunner and observer are all placed forward, where the view is excellent. The hull is of normal Supermarine form, with two built-on steps, and shows the high bows, with nearly vertical stem, which has lately been employed, notably in the commercial flying boat, the "Sea Eagle," although the Spanish machine naturally is not provided with the enclosed cabin found on the commercial type. The two petrol tanks are placed above the top centre section, so that direct gravity feed from either or both tanks can be provided. The bombs are carried in the interior of the hull, the space made available by placing the tanks on the top plane being available for this purpose.
As already mentioned, the first flight test took place on May 21. Further official trials were carried out on May 27 before the Spanish officials concerned. The preliminary test flight was carried out with full load, and the machine then returned to Woolston, to the Supermarine Works, where the Spanish officials were disembarked - or should one say "disemplaned"? The machine was then flown to Worthy Down aerodrome, where permission to land had been obtained. The landing was accomplished very successfully in the presence of a large number of Royal Air Force officers and Spanish officials, who had come over by road to watch the landing. Two members of the Greek Commission were also present, having come over specially to witness the trials.
Flying-Officer Paul Smith, one of the test pilots from Felixstowe Air Station, was present on behalf of the Air Ministry Airworthiness Department, and after checking all weights, etc., he took the machine off after a very short run and proceeded to Southampton. Later on the same pilot took the machine up for sea trials, and expressed himself satisfied with its behaviour.
Later in the day Capt. Biard took out the machine, accompanied by two Spanish officers. This time the object of the test was to try the seaworthiness of the machine. Capt. Biard flew round to the Needles and alighted there in a fairly rough sea. The machine alighted smoothly and got off again without trouble, and was then taken up to her service ceiling, which she reached after a very good climb. She was then given her speed tests, and the trials were considered satisfactory, the machine then being taken over by the Spanish authorities.
Considering that the machine is the first of a new type, and that not a single change or alteration was found to be required, these tests are highly creditable to the Supermarine Aviation Works, and especially to their chief designer, Mr. R. J Mitchell.

The Supermarine "Sea Eagle" (360 h.p. Rolls-Royce "Eagle IX"): Side view. Note the steps from the fin chine to the pilot's cockpit, and the "coach roof" cabin top.

The Supermarine "Sea Eagle," with Rolls-Royce "Eagle IX" engine, is being used on the route between Southampton and the Channel Islands. Note the retractable undercarriage, and the anchor lashed to the side of the boat. 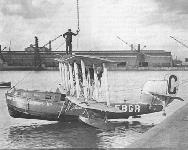 Sea Eagle G-EBGR, as a flying-boat, at Southampton in Imperial Airways blue and silver livery.

The first Supermarine Sea Eagle leaving Southampton on the survey flight to Guernsey and Cherbourg on August 14, 1923. Sir Sefton Brancker shares the cockpit with Henri Biard, while Sir Francis Shelmerdine and Hubert Scott-Paine are in the bows with an Air Ministry representative.

The Supermarine "Sea Eagle" on the water: Note the wheel raised clear. The main petrol tank is mounted on the top plane. 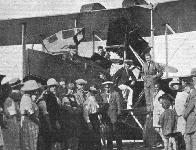 The Supermarine "Sea Eagle" at Sea View, I. of W.: The machine appears to have attracted considerable attention. On the right, standing on the wheel, is Mr. Hubert Scott-Paine, managing director of the Supermarine Works. Next to him is seen Lord Apsley, M.P., and behind him Capt. Biard, the Supermarine pilot.

GENERAL BRANCKER "AT SEA": On Sunday, August 5, Major-General Sir Sefton Brancker paid a visit to the Supermarine Works at Southampton, and was taken for a flight in the new "Sea Eagle." In the upper photograph, the Director of Civil Aviation is seen, with Capt. Biard, in the cockpit. On the right General Brancker is just stepping ashore from the machine, and on the left is shown the central portion of the "Sea Eagle" as she appears when at rest on the sea. Note the wheels lifted clear of the water. On August 14 a flight was made, also with General Brancker as passenger, from Southampton to Cherbourg, over the new route which is to be opened shortly.

A NEW SUPERMARINE AMPHIBIAN FOR SPAIN: The engine is a Rolls-Royce "Eagle IX." The machine carries pilot, gunner, and observer forward. A camera is fixed in the interior of the hull, where also bombs are carried.

A few of the Supermarine amphibians on board the Spanish Government vessel en route for Spain.

The hull of Sea Eagle G-EBGR (wrongly marked G-EBGS) being handed over to John Brancker, at Hythe, by Victor Paine, half-brother of Hubert Scott-Paine, in September 1949. In the back­ground is the Short Solent Somerset.

One of the three Sea Eagles as they appeared in service with British Marine Air Navigation.
<<   0/0   >>