Armstrong Whitworth A.W.52 (UK)
First flown on 13 November 1947, the A.W.52 was a tail-less research aircraft designed to obtain data to determine the final shape and detailed design of a six-jet tail-less transport aircraft.

The Armstrong Whitworth A.W.52 jet-powered flying wing was designed to achieve a high degree of laminar flow, although predictions were not realised.

Armstrong Whitworth A.W.52 TS368, flown by Franklin and powered by two Rolls-Royce Nenes. The Derwent-powered A.W.52, TS363, did not fly at the show.

Armstrong Whitworth's AW 52 started as a twinkle in Chief Designer, John Lloyd's eye towards the end of 1943. Following flight testing with the AW 52G glider, the Ministry of Supply sanctioned the construction of two AW 52 to serve as 3/4-scale flight test machines for a proposed tailless airliner. The first of the pair, TG 363, seen here, took off for its maiden flight on 13 November 1947, followed by TG 368 on 1 September 1948. Incorporating a laminar airfoiled wing and powered by twin 5.000lb s.t. Rolls-Royce Nenes. These expensive machines proved a bitter disappointment, their laminar wings becoming instantly far less efficient the moment a fly struck their leading edges. To compound matters, the lack of adequate tail moment arm damping produced pitch axis control problems at high speed, leading to the imposition of a 288mph indicated limitation.

Panoramic view of the participants of the 1948 SBAC Farnborough show, headed by one of the two A.W.52s present. The aircraft are assembled on the north side of the airfield and 50 took part in the flying programme.

A front view showing the canopy offset to port and the partially buried nacelles.

Photographs of the second A.W.52, TS368, seem to be rare. It differed from TS363 only by having Derwent engines instead of Nenes. 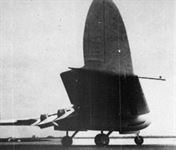 An unusual early photograph of TS363 before markings were applied

A sequence showing the A.W.52G under tow from Coventry on April 26, 1946. The bifurcated cable was attached below and behind the leading edge. When these pictures were taken, the glider had completed 22 1/4 hr towed flight and 12 3/4 hr free flight. It was usually released at 20,000ft.

A plan view of the A.W.52G under tow, showing the straight trailing edge between the main undercarriage legs.

The A.W.52G comes in to land. The wind-driven pumps in the main legs provided power to draw air into the slots in front of the elevons. 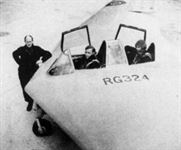 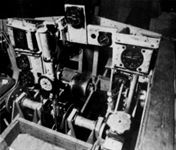 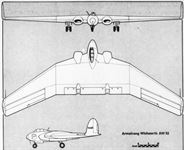