THE PERCIVAL "TWINS”
The Q4 and Q6 Monoplanes: Choice of Engine and Undercarriage Installations Cruising at 185 m.ph. with Two Gipsy Six IIs

ALTHOUGH the Percival Q.6. has only been in existence for a comparatively short time, quite a number of them are in use, and, more recently, two have been sold for internal air­line work in Lithuania. There are actually two versions of the Q type; one, the Q.6., is fitted with Series II Gipsy Six engines and v.p. or constant-speed airscrews, and the other, the Q.4., is fitted with two Gipsy Majors. The latter is not perhaps so well known, and the more important figures for loading and speed are as follows: All-up weight, 4,750 lb.; weight empty, 3,000 lb.; maximum speed, 173 m.p.h.; cruising speed (with fixed undercarriage), 155 m.p.h.; and standard range 700 miles.
With two Gipsy Sixes the Q.6. may be described as a six-seven-seater de­signed for the fast yet economical work either on airlines or for special charter and general military or civil duties, though one or two private owners are already using them. As in the case of the smaller Percival types the structure is of wood with a new type of torsionally rigid spar and ply-covering for the three-section cantilever wing, and plywood box construction with fabric covering (carried on stringers and formers) for the fuselage. The tail unit is fully cantilever. In standard form the undercarriage is fixed and is faired in deep trousers, but the retractable type of undercarriage can be fitted if the purchaser so desires.
In the ordinary way the cabin is arranged without a bulkhead between the pilots’ section and that used by the passengers. Dual control is provided, with the throttle, mixture, airscrew, flap, brake, and trimming controls centrally disposed between the two pilots. The standard equipment includes Sperry free gyro instruments, landing and navigation lights, and engine starters. Heating and ventilation are controllable.
Percival Q.6. data: Span, 46ft. 8in.; length, 32ft. 3in.; all-up weight, 5,500 lb.; weight empty, 3,500 lb.; wing-loading, 19.8 lb./sq. ft.; power-loading, 13.4 Ib./h.p.; maximum speed, 195 m.p.h.; cruising speed at 7,000ft. (fixed undercarriage). 172 m.p.h.; landing speed (with flaps), 58 m.p.h.; service ceiling, 21,000ft.; ceiling on one engine, 6,500ft.; rate of climb, 150ft./min.; and cruising range with standard tankage, 700 miles.
Makers: Percival Aircraft, Ltd., The Airport, Luton, Beds (Luton 2960), and 20, Grosvenor Place, London, S.W. 1 (Sloane 3274).

Quite delightfully clean, even with a fixed undercarriage, the Q6 with retractable wheels will be uncommonly attractive.

KEEPING US ON THE MAP: The dearth of truly modern British commercial aircraft types is met to no unimportant extent by the introduction of the Percival Q4 and Q6 twin-engined monoplanes. Apart from being attractive propositions for the private owner the newcomers should be useful for charter and feeder work. This attractive view shows the prototype Q6 (Gipsy Six IIs), with fixed undercarriage, flying near Luton Aerodrome the other day.

Despite the comparative roominess of the cabin the new Percival is of attractive external form. The efficient windscreen shape is discernible here.

G-AEYE, the prototype Q.6 flying near Luton in 1937. It made its first flight from there on September 14, 1937 in the hands of its designer.

One of three remaining Percival Q-6s on the British Register, G-AEYE (c/n. Q.20), was built in 1937. May be seen at Croydon Airport. Has white top decking.

The first and last. In the foreground, G-AFAA, the last Mew Gull built; in the background the prototype Q.6 G-AEYE, seen at Hayes in 1939.

A well-arranged trio of Percival Q.6 monoplanes (two Gipsy Six II). This type is likely to make its mark as a small commercial type.

CIVIL FORMATION: A pleasant impression of three of the new Percival Q.6 monoplanes, specially “posed” by their pilots for Flight's photographer. The nearest, which is painted flame and yellow, is for King Ghazi; next is the demonstrator; and third is Sir Philip Sassoon's. The Q.6 is a feeder-line, charter or luxury private-owner type, and is fitted with the Gipsy Six Series II. 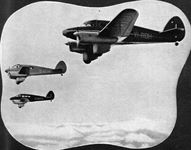 Q.6 YI-ROH, Bird of Eden, was sold to King Ghazi of Iraq.

First Q.6 fitted with a retractable under­carriage was VH-ABL. It was not delivered to Australia and instead was registered G-AFMT and sold to Vickers Armstrongs Ltd.

Four Percival Q.6s had retractable undercarriages. One was VH-ABY, seen here during a high speed flypast at Luton.

FOR LITHUANIAN SERVICES: As related above, these two radio-equipped Percival Q.6s were recently flown out to Kaunas for use on Lithuania’s first airline - an internal one between the base and Palanga.

One of seven Q.6s built to Air Ministry Contract was P5636. Other civil Q.6s were impressed into RAF service on the outbreak of the war.

Captain Edgar Percival at the controls of the prototype Q6. It will be gathered that there has been no stinting of elbow room in the cockpit, nor, for that matter, in the cabin.

ROYAL EQUIPMENT: Inside King Ghazi’s Percival Q.6. On the right is the very complete Marconi two-way radio equipment with D F (or homing) loop, the graduated control wheel of which can be seen at the top of the picture. Interesting features of the Q.6 dashboard are the trimming cranks on the throttle bank, the D.H. constant-speed airscrew controls at the top of the dash to the right of the throttles, and the vacuum-operated flap control below the airscrew levers. All the six seats have Irvin seat-type parachutes.

A sectional drawing of the Percival Q-6 monoplane.

The "backbone" of the Percival Q6 showing the box type of fuselage construction and the framework beneath the ply-covered nose.

Showing the principle of the Percival wing construction as used in the "Q" machines. The wing is mainly ply-covered. 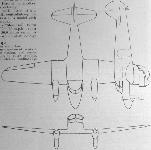