One of the less well-known roles fulfilled by the Halifax was that of maritime reconnaissance and patrol. Illustrated here is a Halifax GR Mk II Srs IA serving with No 58 Squadron of Coastal Command in June 1944. 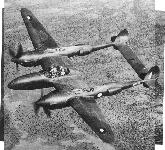 Австралийские ВВС эксплуатировали три фоторазведчика F-4 Lightning - они входили в состав 7-го подразделения фоторазведки и решали задачи по мониторингу действий японских сил.
The P-38 served with the RAAF in the photo-reconnaissance role. Illustrated is the F-4 A55-3 (previously 41-2122), acquired for service with the RAAF's No I Photographic Reconnaissance Unit early in 1943 as a replacement for one of the pair of F-4s that had gone into service in October 1942 but was damaged beyond repair in December 1943 when it force-landed with the undercarriage retracted and the original A55-1 suffered an undercarriage collapse and subsequent severe fire in September 1944. Two other F-4s, temporarily on loan from the USA AF and believed to be 41-2120 and 41 -2156, were operated in New Guinea by No 75 Squadron, RAAF, but were never taken on charge.