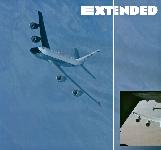 The RC-135S fleet was the last to be re-engined with F 108s. The distinctive black starboard wing of the burning star tasked aircraft is noteworthy.

A rivet joint over Saudi Arabia in 1990 during support for Operation desert shield.

The set of three small antennas under the nose of RC-135W 62-4139 help identify it as a Block III aircraft. Under the centre section are the MUCELS.

Budget cuts forced the first OC-135B to be put into storage at Davis-Monthan AFB.

OC-135Bs carry a Sandia AN/APD-14 SAROS in a blister under the forward fuselage.

Of all of the many variants of the KC-135 'family', the 'RCs' have long held the greatest fascination

Rivet Joints continue to support operations over Afghanistan (this example taken on January 7, 2007) and Iraq.

The WC-135W is used to undertake the constant wind mission, retrieving atmospheric samples in support of nuclear test treaties.

Most of the reconnaissance Stratotanker variants have been equipped with an in-flight refuelling receptacle - open in this view - to increase mission endurance.

COBRA BALL I 61-2663 on approach to Mildenhall in December 2001 with the five busters and square antenna on the forward fuselage and teardrop antenna in front of the tailplanes.

The addition of various satellite communication devices added a row of T-shaped antennas to the upper fuselage. Three are apparent on this RC-135V.

The RC-135U has a uniquely-shaped rear fuselage. The circular radome under the forward fuselage is also visible on 64-14847.

One of the four original RC-135As, now converted to KC-135D tankers
The RC-135As were the only photographic reconnaissance versions of the Stratotanker, but were not a success.