'90-13' is one of the first T.8 transports delivered to the EdA. Complete identification is not possible, owing to the absence of the EdA tail serial.

B.2I-1 (c/n 091) sporting the camouflage scheme of most B.2Hs. After undergoing extensive trials in the GEV (INTA), it was assigned to 90 Grupo de Estado Mayor (90th High Staff Group) as T.8-77. Later, it received the EdA serial T.8B-77 and, finally, after being converted to a bomber, it became B.2I-1. This machine was the prototype of the Merlin-engined versions.

T.8B-124 (c/n 118) was first flown in October 1959. After serving with no less than five EdA units, it was sold to Warbirds of Great Britain late in 1976. In England, the aircraft, built as a transport, was converted to 'bomber' status, a ventral gondola and a turret being installed. Col 'Lefty' Gardner, from the Confederate Air Force, found the flyable T.8B at Blackbushe, Hampshire, UK, in December 1976 and purchased it. Finally, after overcoming some problems, the aircraft could be flown to the USA on September 24, 1977. There, the CAF's Arizona Wing decorated the aircraft as a KG 51 machine.

Immaculate aspect of a brand new B.2I on the Tablada grass parking zone

Taxying in after completing its routine at the Confederate Air Force Airshow 1999 at Midland, Texas, the Arizona Wing's N7261S - presently the only airworthy 'Pedro'.

Our photograph, depicting the Confederate Air Force's CASA 2111 flying from Harlingen last summer, was taken by John Luke. The Spanish-built Heinkel He 111 bomber is powered by a pair of Rolls-Royce Merlins in place of the original Daimler-Benz or Junkers Jumo engines.

Post-Spanish Air Force view of 'Pedro'. Subject of the colour artwork, transport T.8B-124 (G-BDYA) parked at Blackbushe, Hants. It carries Luftwaffe markings, but the small-sized Spanish roundel can be seen under the wing.

To provide a convincing Luftwaffe bomber force for the film, the Ejercito del Aire (Spanish Air Force) made its entire complement of 32 CASA 2.111s (essentially Rolls-Royce Merlin-powered Heinkel He 111s licence-built in Spain) available. Two examples were bought by the production company, Spitfire Productions, and flown to the UK, where they were registered G-AWHA and ’WHB. Both are seen here at Bovingdon during filming.

One of a series of magnificent colour photographs taken by Richard Riding at Bovingdon during the making of the film Battle of Britain in November 1968. 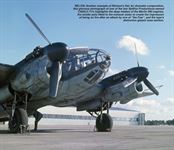 Another example of Richard’s flair for dramatic composition, this glorious photograph of one of the two Spitfire Productions-owned CASA 2.111s highlights the deep intakes of the Merlin 500 engines, the smoke pots fitted to the exhaust stubs to create the impression of being on fire after an attack by one of "the Few", and the type’s distinctive glazed nose section.

Another spectacular colour photograph of one of the two CASA 2.111s acquired by the production company, taken as its starboard Merlin coughs into life. Both G-AWHA and ’WHB were painted in 1940-standard two-tone green splinter camouflage on the upper surfaces with pale blue undersides, as were all the bombers used in the film. Both also wore various codes, including 6J+PR, as seen here, so it is difficult to say with certainty which of the two this is!

B2I-37 was sold to Spitfire Productions and ferried to Duxford, Cambs, in mid-1968 for the film 'Battle of Britain', with the UK civil registration G-AWHB. It wore several Luftwaffe codes, including 'U6+GN', illustrated. Today the aircraft is under restoration by Aces High at North Weald, Essex.

Several propeller types were tested with the Merlin engines. Taken at Tablada, the prototype (c/n 091) fitted with four-bladed Rotols and devoid of EdA markings other than the rudder-mounted St Andrews' Crosses

B.2H-49, a C-2.111A, in 11 Regimiento markings. It sports the second variant of the wartime camouflage pattern. White-outlined fuselage and tail codes indicate that this picture was taken after 1951.

At CASA's Tablada parking zone, a transport T.8B showing the clean lines of the C-2.111F (sometimes referred to as C-2.111T) after deletion of the dorsal turret and the ventral gondola.

At its Gando base, a B.2I was assigned to the second Escuadron, 362nd, of 36 Ala Mixta, as denoted by the fuselage code numbers.

Probably the first C-2.111 built in Spain, believed taken at Tablada in 1950. Note original spinners and VS-11 propellers.

Likely to be one of the first B.2HRs, probably B.2HR-61, soon after being delivered to 96 Escuadrilla del Servicio Fotografico y Cartografico, at Cuatro Vientos, Madrid

Former 25 Ala machine in the markings of 26 Ala. At that time, unit markings were often painted over the crudely erased ones of the unit the aircraft had been assigned to previously.

Poor quality but one of the very few illustrations showing an Ala 28 BR.2I. These were the first Merlin-engined C-2.111s and they experienced some troubles with the propellers - hence the lack of spinners. Barcelona, September 1956.

Los Llanos-based 13 Regimiento received the first B.2Hs in September 1952. This view, taken in the spring of 1953, shows the new B.2Hs and, in the background, some of the previous Ju 88s.

One of the maintenance hangars at CASA Tablada containing some B/BR.2Is of the 25, 26 and 27 Light Bomber Wings undergoing the inspect and repair as necessary (IRAN) process. In the foreground is B.2I-44 '27-3', one of 70 machines fitted with the first Merlins purchased from UK.

Devoid of all armament, B.2I-67 '27-15' over the Spanish southern coast. Noteworthy are the well-worn three-tone camouflage and the lack of spinners.

One of 11 Regimiento's first B.2Hs and one of the first series as it is fitted with two of the few propellers acquired directly from Germany. Other noteworthy details are fuselage code numbers, which are not white-outlined, and the tail emblem.

No.46 Mixed Wing succeeded 36 Mixed Wing at Gando on April 1, 1965. The new unit's 462 Escuadron received the former 362 Escuadron's complement of B and BR.2Is. B.2I-43 '462-7' photographed during a routine patrol over the Spanish Sahara territory. The tail unit badge is clearly seen.

From April 1965 a new EdA coding system was introduced, the most evident feature being three-digit unit numbers. A BR.2I, is pictured in October 1966 while overflying an Armada vessel, with 271 Escuadron markings.

Probably taken late in 1951, a poor-quality picture, but revealing several interesting details. The B.2H in the background wears the emblem of the wartime SM.79-equipped 4-G-28. When 11 Regimiento came into being, it was painted on some of its SM.79s. Later, the Savoias were superseded by B.2Hs and it seems that 11 Regimiento CO intended to perpetuate the emblem, but only a few B.2Hs sported it in the event. The spinner in the foreground shows the shaft box that had to be fitted to the Jumo 211F-2s in order to them them to the licence-built de Havilland HL 302.644 propeller.

In October 1959 the Moron-based Ala 27 de Bombardeo Ligero (27th Light Bomber Wing) was transferred to Malaga. Two Ala 27 B.2Is flying over the Mediterranean during an air-sea co-operation exercise. Nearest is B.2I-102 '27-36', one of 16 re-engined examples which were not delivered to the EdA when fitted with their former Jumo powerplants

Flying high over the African coast, BR.2I-13 wearing the two-tone camouflage applied to the machines used during the filming of 'Battle of Britain'. Note the small size of the nationality and unit markings. 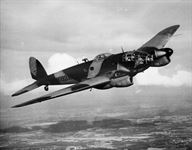 The CASA 2.111 has good low speed characteristics, and is completely viceless when flown normally.

N99230 coming in to land at Blackbushe on October 7 last year. The transport version, registered N72615, left England on September 24 for the Confederate Air Force base at Harlingen, Texas. N99230, the photographic reconnaissance variant, has now followed it. 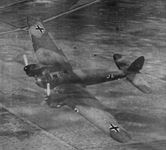 The transport version, N72615, is now flying in German markings with the Confederate Air Force.

T.8B transports were mostly used by second-line units. T.8B-124, at Reus in June 1967, assigned to the 982 Flight, a transport and liaison unit based at Son San Juan. At the end of its career, it was equipped with cameras and delivered to the 403 Escuadron thus becoming the sole 'T.8R' in the EdA. This aircraft is still flying, with the Confederate Air Force.

A close-up of C.4K “138”, possibly after a nose-over on landing. As well as providing a good close-up of the oil cooler intake, this picture includes a number of CASA C-2111s (Merlin-engined Licence-built Heinkel He 111s) in the left background.

The pilot's position in N99230, illustrating the assortment of instruments and switches which obstruct the view forward. 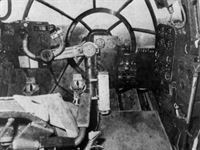 The starboard side of the cockpit with crewman's couch in the foreground.