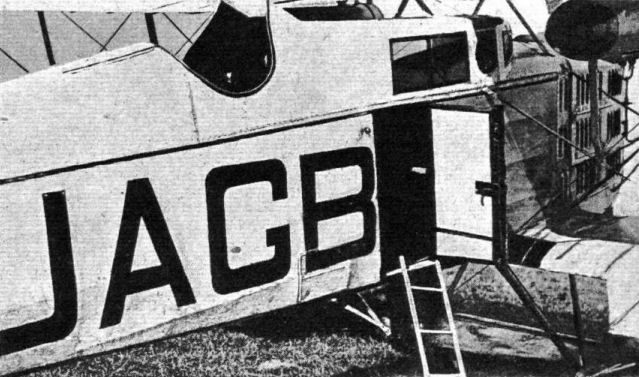 THIS firm is showing three complete machines and one very interesting power unit. One machine is a military two-seater fighter of the famous C 2 XVII type. A seaplane of the ДальшеMore>>> A 2 XIV type is also shown, as well as a transport machine of the "Berline" type, XVIII T. This machine, which is a development of the Breguet night bomber, carries six passengers, in addition to the pilot. The engine is a 450 h.p. Renault, with which the machine is capable of a speed, at low altitudes, of 160 kilometres per hour (99 m.p.h.), and a climb of 10,000 ft. in 40 mins. The range is four hours at full throttle, or about 400 miles.

Perhaps the most interesting of the Breguet machines shown is the large passenger machine known as the Berline. The series number of this machine is XVIII T. In addition to six passengers accommodated inside a comfortable cabin, the machine carries a pilot and a wireless operator, a very powerful wireless set being carried. The 440 h.p. Renault engine is placed behind a nose radiator, and is covered in by an aluminium cowl provided with numerous louvres.
The undercarriage gives the impression of being extremely strong, and forms a letter W as seen from the side, the lower points of the struts being joined by a longitudinal horizontal member carrying the shock absorbers. The short divided axle has a form of ball and socket joint for its hinge, and the axles rest in grooves in the top of the fairing which covers the cross members of the undercarriage. The tail skid is of wood, terminating at the rear in a leaf spring. The rear two-thirds of the wooden skid is enclosed in a thick aluminium casing.
The biplane wings are connected by steel tube struts in aluminium stream-line casings. The lift tension members are stranded cables, while the anti-lift wires are solid piano wire. The wire strainers used are very similar to those which were fitted on the early Breguet biplanes many years before the War. The ailerons are balanced in the usual way, but the method of operating them is unusual. The cranks are horizontal (or nearly so), and from them cables pass up inside the rear interplane strut fairing, as shown in one of the accompanying sketches. Altogether the Breguet Berline gives the impression of being a very workmanlike job, and as similar machines have done well on the Paris-London service, alternating with the Handley Pages, this impression may be trusted to be correct.

The cabin of the Breguet limousine 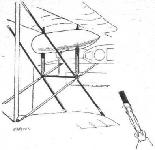 LOUIS BREGUET: In all the machines shown by this constructor the fuel tanks are mounted between the planes. The sketch shows the method of mounting on the seaplane

Detail of axle attachment on one of the Breguets