Several countries are interested in using the Yak-130 as a light combat aircraft.

Other significant improvements provided by the AW101 over the Sea King include a 30kt (55km/h) increase in cruise speed, increased mission range, endurance and survivor capacity and the capability to operate in harsh weather including continuous icing conditions.

Stretcher and passenger capacity is significantly greater for the AW101 which will prove vital during emergency evacuations for up to 54 persons.

One cabin configuration option is to carry more than one critically ill patient in a treatment area that can be compartmentalised. The stretcher layout provides sufficient room for two plus a full range of medical equipment with room for easy access. The AW101 can be quickly re-roled and equipment can be removed and replaced with seats of equipment.

The AW101's in-built cabin flexibility supports the diverse range of missions anticipated once in service.

A Hellenic Air Force 335 Squadron F-16D Block 52+ taxies from its shelter at Araxos Air Base in Greece with a DB-110 attached.

The Sagem Euroflir 410 electro-optical system is mounted on the nose.

The senso works in conjunction with the tacco, who’s seated in the front cockpit, managing the NH90's systems to complete the mission.

A second senso position is available for complex sorties or training flights.

Three of the five multi-function displays present mission and tactical data, with the others showing information about the flight and aircraft systems.

An artist’s impression of a Gripen E firing a Meteor BVRAAM.

Saab hopes the Brazilian government will finalise its agreement for Gripens this year.

The Royal Norwegian Air Force's AW101 s will have to meet the same 99% availability rate currently achieved by the Sea Kings, one of which is seen here hovering over MS Bohus during Exercise Skagex.

The Royal Norwegian Air Force’s fleet of 12 Sea King Mk 43Bs has rescued over 33,000 people since the type was introduced in 1972. 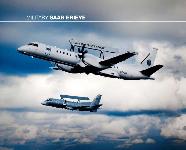 Argus 100004 was one of two that briefly served the Hellenic Air Force before being returned to Sweden and upgraded as an ASC 890.

The MoD faces decisions about what it’s going to do with its MQ-9 Reapers once they are withdrawn from Afghanistan.

A No.39 Squadron pilot remotely controls a Reaper from Creech AFB during a training sortie over the west coast of America.

The Tarantula Hawk takes off vertically and hovers to get a clear view of the ground ahead of troops.

Four countries, including Chile, now use the C295MPA, with Airbus Defence and Space forecasting a need for 152 MPA aircraft in the next ten years.

The Mk 46 torpedo is the C295MPA’s principal anti-submarine warfare weapon.

Winglets on the C295W offer a 3% to 6% improvement in overall fuel consumption over the baseline aircraft.

Each operator workstation features a 20in (50.8cm) display screen, larger than that in earlier C295s.

The Fully Integrated Tactical System (FITS) combines information from onboard sensors, different types of which can be installed depending on customer requirements. 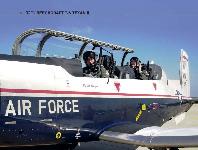 The PZL-Swidnik Solo will be used as the concept capability demonstrator for the Royal Navy’s TMUAS programme.

Transas is developing a military version of its Orion.

An artist's impression of the Inokhodets.

In April 2014, Russian television broadcast pictures of the first Altair under construction, showing progress on its fuselage and engines.

THe Altair is a civil version of the Altius-M

Mexico’s air force uses its EMB-145SA in the fight against drug smuggling.

The Brazilian Air Force has been using the EMB-145SA for a decade.

Brazil’s fleet of E-99s is currently being upgraded as E-99Ms, the first having recently been redelivered.