MiG-21 PF “4228” was one of the seven shot down during Operation Bolo, the pilot, Vu Ngoc Dinh, ejecting safely. The aircraft is seen here with a typical armament load of an R-3S (AA-2 Atoll) air-to-air missile on each wing and a 490lit (107 Imp gal) PTB-490 centreline fuel tank.

In the wake of the Operation Bolo setback, the VPAF grounded its MiG-21s for several weeks before returning to combat with revised tactics, which inflicted heavy losses on the Americans in the last days of the Rolling Thunder campaign, which ended in 1968. Here VPAF ace Nguyen Nhat Chieu (far left) relives a combat.

Fishbed-Ds are pushed out at Noi Bai in the spring of 1966 in preparation for another air-defence mission against the USAF. The VPAF took the bait during Bolo and scrambled the equivalent of an entire squadron, the MiGs suffering accordingly. Note "4228”, lost during Bolo, in the forgeround.

The upgraded MiG-21 PF Fishbed-D was introduced into VPAF service in April 1966. One of the first was “4225”, an early production example completed with the original fin - a broader version was fitted to later production aircraft to improve stability. The PF variant incorporated extra fuel tanks behind the cockpit, giving it a “fatter neck”.

McDonnell Douglas F-4C 63-7680 was the Phantom flown by Col Robin Olds during Operation Bolo, armed with AIM-7E Sparrows mounted in underfuselage troughs (two forward and two aft) plus a pair of AIM-9B Sidewinders on each wing. The AN/ALQ-72 ECM pod fitted for Bolo is shown beneath the tail. Olds’s Phantom was yet to be marked with the “FP” tailcode of the 497th TFS, 8th TFW. 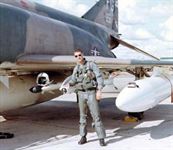 Captain Walter Radeker of the 555th TFS poses with an "FG"-coded Phantom of the 433rd TFS at Ubon in Thailand in early 1967. The Phantoms were pooled for Bolo, and only those deemed best were used.

The McDonnell Douglas F-4 Phantom II formed the backbone of the USAF’s fighter units at the beginning of the Vietnam conflict. They were, however, also used in numbers for the ground-attack role in addition to the Republic F-105s. This F-4D of the 435th TFS, 8th TFW, refuels before heading north on a bombing mission in 1968.

Wearing the “FO” tailcodes of the 435th TFS, a pair of F-4Ds heads out for a bombing mission in North Vietnam. By the end of 1966 most of the 8th TFW’s Phantoms were engaged on ground-attack missions.

An F-4C Phantom II of the 366th TFW, as used in Operation Bolo, awaits another mission at Da Nang.

Bearing a red star victory marking on its intake splitter plate, F-4C 64-0838 was photographed a few weeks after Bolo, when it was flown as Rambler 4 by Maj Philip Combies of the 433rd TFS, and during which it shot down a MiG-21. This Phantom still exists and is displayed at the US Space & Rocket Center at Huntsville, Alabama, USA.

A pair of Lockheed C-130B-IIs similar to this example were employed for the first and only time in a tactical role during Operation Bolo. The 6988th Security Squadron crew (or "Bats" as they were known) comprised linguists and translators who eavesdropped on orders issued by the VPAF controllers and passed the information on to the USAF pilots.

The F-105D undertook the lion’s share of Rolling Thunder missions against North Vietnam, the type being able to carry an impressive bomb package, but lacking the agility of the Phantom. This example wears the “JJ” tailcodes of the 34th TFS, based at Korat in Thailand, and carries an AN/ALQ-71 ECM pod on its outboard pylon.