The late Tommy Rose, chief test pilot for Miles during the war years, seated in the M.20/2.

This view of the Miles M.20/4 shows the thick-section wing, the positioning of the eight Browning guns and the revised undercarriage.

Miles M.20/4 U-0228. This revised aircraft is recognised by its more pointed spinner, the spindly undercarriage legs and catapult points on the fuselage underside beneath the cockpit.

Two photographs taken during the construction of the Miles M.20/2 fighter. The aircraft was ready to fly only 65 days after the start of design work.

View of the Miles M.20/2 in its early form, bearing the B Conditions identity U9.
The M.20’s bubble canopy was ahead of its time, as was its high wing loading. 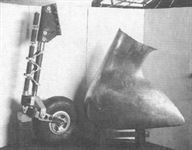 An undercarriage leg and attendant fairing from the M.20/2.

View of the Miles M.20/2 in its early form, bearing the B Conditions identity U9.

The Miles M.20/2 AX834 in an altered camouflage scheme - the lower surfaces were doped trainer yellow.
The four starboard gun ports clearly visible. The guns could be tilted for servicing. The wheel spats may well have proved to be mud traps had the M.20/2 gone into service.

The camouflaged Miles M.20/2 ask AX834, after overshooting the snow-covered grass at Woodley aerodrome on February 6, 1940. It finished up in a sandpit - pilot Hugh Kennedy was unhurt. The repositioned tailplane is clearly shown.