Royal Flight of Oman Boeing 747SP-27 A4O-SO (c/n 21785) photographed at London Stansted Airport in July 2019. This aircraft, built in 1979, has served in the VIP transport role since 1984 after briefly being operated by Braniff.

Boeing predicts greater demand for medium-sized freighter aircraft such as 777s, of which China Airlines has signed a commitment for six.

Air Antwerp is a start-up Belgian airline, co-owned by KLM and CityJet, which plans to launch services in the autumn previously operated by VLM Airlines using Fokker 50 OO-VLS (c/n 20109).

The first C295 Fixed Wing Search and Rescue Aircraft for the RCAF will be delivered to Comox, British Colombia, before the end of 2019.

British Airways is one of two UK carriers introducing the A350-1000 to service. Its first aircraft, G-XWBA (msn 326), is seen here departing Toulouse on a test flight prior to delivery.

Madagascar's 'new' aircraft, including this BK117 registered ZS-HRK, were demonstrated to the nation’s public during a display on the country's Independence Day on June 26, 2019.

The first P-8A for the RAF, serial number ZP801, will be delivered to the UK in early 2020 after being used to support training in the United States.

The 70ft-long LauncherOne rocket is carried on the spare engine pylon on the 747-400's port wing. 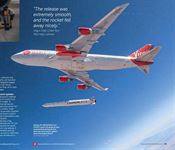 F-35B Lightning ZM146 on final approach for landing at Akrotiri in conventional mode.

Wg Cdr Williams leads 207 Squadron into Marham's new squadron and training facilities located on the south side of the base.

The pilot of F-35B Lightning ZM149 hands his crew bag to the awaiting ground crew.

F-35B Lightning ZM146 during a simulated emergency landing replicating a scenario in which the F135 engine had suffered a flame out. The aircraft is shown landing with a high angle of attack after circling several times from an altitude of 20,000 feet.

Two 617 Squadron F-35B Lightnings in one of the refurbished hardened aircraft shelters.

This photo of the first Boeing 777-9 flight test aircraft rolling out shows the new jet's folding wingtips.
The 777-9's first flight is now scheduled for 2020.