The only Spitfire built on an export contract was the single Mk I for France, which first flew in May 1939 and is seen here as discovered at Orleans by German occupation forces in 1940.
"I enclose a photo that has puzzled me, in the hope that one of your readers can shed some light on it. It depicts a Spitfire and was given by a German airman to an Italian pilot fly ing Fiat B.R.20 against England in the winter of 1940/41. The picture appears to have been taken next to a hangar, and in the background are some high-wing monoplanes, possibly Moranes. The roundels, camouflage and “FW8” serial don’t appear to be British, and the rudder fabric seems to be cut out where the stencils use to appear.
All this makes one think of a captured Spitfire originally supplied to France. I don’t believe any RAF Spitfires were based on the French mainland in 1940. Could this possibly be the Spitfire that was used by the Germans for faked “combat” photographs, together with a BF 109, He 111 and an FW 190?" 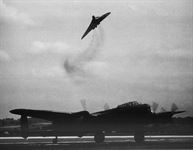 An Avro Vulcan flies over the Battle of Britain Memorial Flight's Avro Lancaster at Yeovilton on August 4, 1979.

An Avro Vulcan flies over the Battle of Britain Memorial Flight's Avro Lancaster at Yeovilton on August 4, 1979.

Lightning F.1A XM182 of No 56 Squadron, photographed by RICHARD WILSON 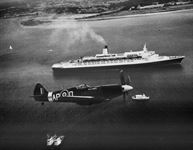 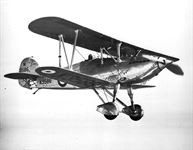 The Flight photograph depicts what was arguably the most beautiful biplane ever built, the Hawker High Speed Fury K3586, powered by the 700 h.p. Rolls-Royce Goshawk engine. Its original powerplant was a 1,000 h.p. Kestrel S, and it later became a Merlin test bed.

The photo, by RICHARD WINSLADE, catches Stampe SV-4B G-AWEF as it climbs into a loop, and was taken from another of its kind.