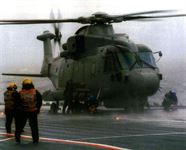 Encouraged by the success of recent orders by Denmark and Portugal, GKN Westland is actively promoting the EH 101. There are still further EH 101 sales prospects, with Canada looking at a follow-on order and the RAF/RN in need of replacements for its Pumas and Sea Kings.

With decreasing defence budgets, military aircraft are expected to remain in service for longer periods of time. Their effectiveness is then increased by continuous system upgrades. It was in anticipation of this trend that BAE Systems changed its core business from that of aircraft manufacturer to a systems house - aiming to retain its world position as a major defence systems and services supplier. Its membership of MBDA, the European missiles powerhouse, ensures that it will continue to play a very important part in the development and manufacture of advanced missiles, such as Storm Shadow, seen here on a Tornado GR.I.

Thanks largely to the success of the Trent 500 series of high by-pass engines, Rolls-Royce has regained its position as the world's leading aero-engine manufacturer. This is due in no small measure due to the company's unparalleled range of aero-engines. The latest variant of the Trent 500 is due to enter service later this year on Virgin Atlantic’s A340-600s.

Eurofighter has carried out its first wind tunnel tests of conformal fuel tanks on the Typhoon, in the highspeed wind tunnel at BAE Systems, Warton. Work on the conformal tanks is the responsibility of a partnership between BAE Systems and GKN Engage of Australia. The tanks, which have a total capacity of approximately 1,150 Imp gal, could increase the range of the aircraft by over 25%, and are seen as a major selling point in the overseas market and as a vital element in developing Eurofighter’s air-to-ground capability.

Founded in 1970, the two shareholding companies of Airbus (the European Aeronautic Defence and Space company and BAE Systems) merged at the turn of the new century to form an integrated company. Airbus UK now reports direct to Toulouse and has two major facilities, at Bristol and Chester. The latter plant is the supplier of all Airbus wings and work is underway on extended facilities which will produce the large wing boxes for the A380. The flow of Airbus wings has been steadily increasing over the years to meet increased demand, the biggest sellers being the narrow-body A320 family members, such as the A320-232 of bmi british midland, which are shown here.

After a protracted gestation period, it at last looks as if the A400M will be formally launched at this year’s Farnborough International Air Show. A decision on the powerplant selection is still awaited, but Airbus has stated that this will not impact adversely on the first flight, which remains set for 2006. The UK will design and manufacture the wing boxes for the A400M, but further details of any other UK industry involvement will await system and component selection later.

Marshall of Cambridge has been involved in virtually every British-built aircraft since World War Two and is now one of the world's leading maintenance and conversion companies. Its next major programme will be the RAF’s ASTOR programme, for which it is responsible for fitting out the basic Global Express airframe with an advanced US-supplied surveillance and battlespace command mission system.

Всего построено более 264 Learjet 45. Экономический кризис ударил и по производству 45-х, на заводе фирмы состоялись акции протеста: персонал требовал лучших условий. В 2011 году 45-й эксплуатировался как VIP-транспорт в Ирландском авиационном корпусе. В августе ирландский Learjet 45 привлекался для санитарных перевозок с побережья графства Клэр.
Whilst the UK may no longer produce complete regional and business jet aircraft, the former Shorts of Belfast has become a specialist airframe supplier within the Bombardier Group. Indeed, the Shorts plant is now busier than ever as the successful Bombardier family of business and regional aircraft takes an ever-expanding slice of the global market. The Bombardier Learjet 45, for which the production line is seen here, is one of eight business and regional jet fuselages designed and manufactured in Belfast. Bombardier has delivered 200 Learjet 45 aircraft and with a healthy order book, this is one of the most successful Learjet aircraft to date.

A largely-unsung UK aerospace success story, Europa Aircraft produces a family of kit-built light plane/motor gliders, with over 800 aircraft already sold. Three members of the Europa family are, from front to rear, Europa XS monowheel, Europa XS Tri-gear and the Europa Motor-glider. A new innovation to the range is the ability to fit either the regular wings, or a set of new advanced glider wings.