Миль Ми-8ТВ
The Mil Mi-8 Hip-E is used extensively by the recently-created Soviet Army Aviation. "The attack helicopter force has been ... approximately doubled in size.”

МиГ-25 - одно из величайших достижений отечественной авиапромышленности 1960-х годов
The MiG-25 Foxbat-E is a modification of the Foxbat-A "with limited low-altitude capabilities". Engines for the MiG-25, which is still the fastest aircraft known to have entered Soviet service, are the Tumansky R-31 single shaft turbojets.

An impression of the Su-25 Frogfoot dedicated ground attack aircraft which according to Soviet Military Power “... may eventually be deployed in the Western Theatre".

Backfire is "capable of carrying three 300-km (185-mile) range Mach 3,0 anti-ship cruise missiles". Some 100 are deployed by the Soviet Air Force with a similar number assigned to Soviet Naval Aviation, and production is continuing at a rate of 30 per year.

An impression of the Blackjack-A strategic bomber which "is likely to be a multi-role aircraft that could deliver both free-fall bombs and air-launched cruise missiles to intercontinental range". This type could be introduced to the operational forces as early as 1986 or 1987. 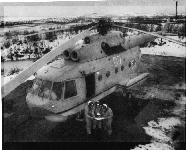 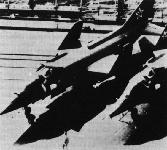 Yak-36MP Forger-A VTOL air defence and strike fighters with AAS Aphid missiles aboard the carrier Minsk. Late last year, a missile-armed Forger made a close-range interception of a US Navy aircraft over the Indian Ocean. The Yak-36MP is now serving aboard three Kiev class carriers, a fourth vessel in this class being expected to join the fleet during the course of next year.

The Su-24 Fencer-A is one of the aircraft referred to as having had "a particularly profound impact on Soviet offensive capabilities".