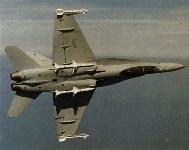 Matra has been responsible for developing the principal radar-guided AAM in France, starting with the R.530 for the Mirage IIIC

Now established in service with the Armee de l’Air, the Dassault-Breguet Mirage 2000C1 is armed exclusively with Matra air-to-air missiles. This example from the Escadre de Chasse 7/2 "Cicognes" has Super 530Ds inboard and Matra 550 Magics outboard.

From R.530 missile, which had an alternative IR form, Matra evolved the Super 530F for the Mirage F1.

Reversing the sequence of events with the Sparrow, the US Navy adopted the Hughes Phoenix AAM after it had been developed for the USAF, primarily to arm the North American F-108 Rapier and Lockheed F-12A, neither of which entered operational service.

Development of the Sparrow AAM began in 1946, with Douglas responsible for the airframe and Sperry Gyroscope developing the radar beam-riding guidance system. Early applications for the production AAM-N-2 Sparrow I included the McDonnell F3H-2M Demon.

The F-15D in its basic role as an air-to-air fighter is seen here carrying the full armament off our Sparrow and four Sidewinder AAMs together with 600-US gal (2723-l) drop tank on the centreline.
In its AIM-7F version, the Raytheon-developed version of the Sparrow now arms (shown) the USAF's McDonnell Douglas F-15 Eagle and the US Navy's McDonnell Douglas F/A-18 Hornet - both of which are shown carrying Sidewinder AAMs on the wing mounts in these photos.

After the successful development of the Sparrow for the US Navy, later versions were adopted by the US Air Force, initially for use on the McDonnell Douglas F-4 Phantom II. Like their USAF counterpart, RAF Phantom FGR Mk 2s were armed with four Sparrows apiece when they entered service in the UK.

Based on the AIM-7E-2 version of the Sparrow, the Sky Flash has been developed by British Aerospace (previously Hawker Siddeley Dynamics) with a new Marconi homing head. Shown serving on the Tornado F Mk 3

Serving on the Tornado F Mk 2 and 3, Sky Flash is seen during a trial firing from a Tornado.