Designed by Dr Ing Giuseppe Gabrielli, the all-metal monoplane Fiat G.50 single-seat fighter was only a limited improvement on the same company’s similarly-powered CR.42 biplane, which was popular with its pilots on account of its superb manoeuvrability, and of which nearly twice as many were built.
Fiat's neat little G.50 Freccia (Arrow) first flew on February 26, 1937, powered by the 840 h.p. Fiat A.74 RC 38 radial, and was an all-metal, single-seat fighter built to an Italian Air Ministry Specification. Entering production in 1938, the G.50 was baptised into combat late in the Spanish Civil War, and began to equip the Regia Aeronautica in 1939. Over 100 were in service by the time Italy entered World War Two, being used in a variety of roles including convoy and bomber escort and ground attack. Armament comprised a pair of 12.7mm Breda-SAFAT machine guns mounted in the forward fuselage top-decking.

Regarded as the finest of Italy’s World War Two fighters to see service in any numbers, the DB 601-powered Macchi MC.202 Folgore was fast and agile. 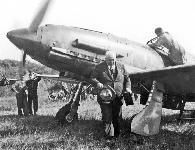 Dr Ing Mario Castoldi, the father of the Macchi Schneider Trophy racers and “MC” series of fighters, beside the MC.202 prototype at Lonate Pozzolo. The MC.202 and MC.205V shared the vast majority of components, an important factor which would have meant an easy and swift switch to MC.205 production using the same jigs.

Gen s.a. Francesco Pricolo, Chief of the Air Staff during 1939-41, surveys the cockpit of the “motorjet”-powered Campini-Caproni C.C.2, as covered in detail by the author in TAH6.

A 353rd Squadriglia Fiat G.55 pays a flying visit to the Castiglione del Lago fighter school in the summer of 1943. The airfield also served the SAI Ambrosini factory on the opposite shore of Lake Trasimeno, where SAI lightweight fighters and licence-built Macchi fighters were produced.

In contrast to the MC.205, the Fiat G.55 was a clean-sheet design, which made it better suited to further evolution (including the fitting of the more powerful DB 603 engine as the G.56), but also meant longer development and tooling times. This is the prototype G.55, which made its first flight on April 30, 1942.

Italian style, German brawn - based on the proven Macchi MC.202 Folgore airframe, the MC.205V Veltro represented the easiest and quickest way to put a Daimler-Benz DB 605-powered fighter into series production. The Veltro was externally distinguishable from the Folgore by the twin cylindrical oil radiators under the nose. From the 101st production aircraft, 20mm wing cannon were fitted, as seen here.

The same graceful family lines disguise the fact that the Macchi MC.205N Orione was in reality an all-new design, with little in common with the existing MC.202; the Orione had a larger wing and an improved fuselage. Neither of the MC.205N sub-variants, the N-1 and N-2 (with wing-mounted cannon), would be put into production.

The MC.205V prototype at the Guidonia test centre, near Rome, during the brief evaluation trials. While the Re.2005 and G.55 initially flew with German VDM propellers, the Macchi always sported a Piaggio P.2001. Fiat was keen to adopt its licence-built Hamilton unit for the G.55, but the Regia Aeronautica was adamant that the P.2001 would become standardised.

Following the September 1943 armistice, the German occupying forces allowed Italian industry to fulfil production of aircraft already at an advanced stage of completion. The Aeronautica Nazionale Repubblicana of Mussolini’s puppet Italian Social Republic thus received a number of MC.205Vs, as seen here, and G.55s, assigned respectively to the 1st and 2nd Gruppi.

The second Reggiane Re.2005 prototype, with its elegant elliptical wingplan and distinctive outward-retracting undercarriage. The DB 605-powered Re.2005 bore only a passing resemblance to the company’s previous fighter designs. Its early service with the 22nd Gruppo in the defence of Naples brought to light problems with flutter in the rear fuselage,