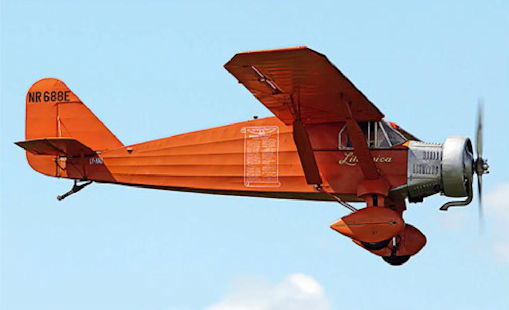 Bellanca Pacemaker (USA)
The Pacemaker of the early 1930s was a six-seat cabin monoplane powered by a Wright Whirlwind or Pratt & Whitney Wasp Junior radial engine of 298 kW (300-400 hp). Maximum speed with the 298 kW (400 hp) Whirlwind Model ДальшеMore>>> E engine was 249 km/h (155 mph). A seaplane version was also produced with twin Edo floats. An example of a version with a 167.7 kW (225 hp) Packard-Diesel engine was flown by Messrs Walter Lees and Frederic Brossy between 25 May and 28 May 1931 to break the world’s non-refuelling endurance record, by remaining airborne for 84 hours 33 minutes at Jacksonville, Florida.

OF unmistakable Bellanca design, the "Senior Skyrocket" for 1934 is a six-seater monoplane. The wings are of two-spar wooden construction. Trailing edge flaps are fitted, and the bracing struts form supplementary lifting surfaces at high angles of attack. Plywood covering is used for the leading edge of the wing, preventing the fabric from becoming depressed between the ribs, and maintaining the full lift characteristics. In each wing is a 100-gallon welded aluminium fuel tank resting on felt pads. The "slot balanced" ailerons, of high aspect ratio, are effective after the stalling point has been reached. The cabin is 124 in. long, 45.5 in. high and 57.5 in. wide. A baggage compartment behind the rear seats, accessible from inside and outside, has a capacity of 15 cu. ft. Individually operated ventilation, adjustable rear windows, and cabin heater are standard equipment. By means of a duct beneath the cabin floor fresh air is taken from a point on the front wing strut and supplied to the cabin. The amount of air to each seat is controlled by butterfly valves in the floor, and the two main air ducts terminate in large outlets in the rear cabin wall, so that if the individual ducts are in operation or not a continuous supply of fresh air enters the cabin at all times during flight. The heating arrangements are carried out through the same system, the pilot controlling the mixture of the heated and the fresh cold air by means of a master valve. Heat is supplied by fresh air passing through a metal cuff enclosure or "stove" on two portions of the engine exhaust manifold.
A new type of cantilever undercarriage is used. In this the oleo struts are mounted in the lower portion of the fuselage in "crosswise" or opposed fashion, transmitting loads from each "arm" of the undercarriage to the opposite side of the fuselage.
A Pratt and Whitney S.1 D.1 "Wasp" rated at 525 h.p. at 7,000 ft. is the standard power plant. This engine is provided with an Eclipse direct drive electric starter and a hand crank. The cowling is of the full N.A.C.A. type firmly attached by means of a compression system wherein felt pads in individual sockets are made to fit tightly over the rocker box heads by means of a master screw tightening device. The cowling behind the engine is in four segments. An oil tank with a capacity of 14 gallons is carried beneath the engine cowling.
The ''Senior Skyrocket'' is available in “Standard” and "De Luxe" form, both being powered by the Pratt and Whitney "Wasp" S.1 D.1. The two models differ mainly in matters of equipment, the "De Luxe" type being custom-equipped and having a specially arranged cabin interior, additional instruments and more latitude in the choice of colours and upholstery materials. Each model may be converted into a seaplane. 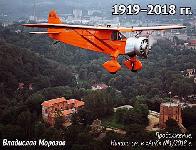 AT THE DETROIT SHOW: The Bellanca Monoplane with Whirlwind Engine.

ANOTHER ECHO: Major Sydney Cotton's Bellanca Monoplane, in which he set off to the rescue of Mr. Courtauld. Upon reaching Iceland Major Cotton learned that the rescue had been effected, and then returned home.

Walter Lees (right) and Frederic Brossy (left) checking up on their fuel supply before taking off on the record-breaking non-refuelling endurance flight in the Bellanca "Pacemaker" Monoplane with 225 h.p. Packard-Diesel engine.

Bellanca "Pacemaker" Monoplane with 225 h.p. Packard-Diesel engine, in which the new World's Non-Refuelling Endurance Record was made by remaining aloft 84 hours 33 minutes, at Jacksonville, Florida, May 25 to 28, 1931.

Bearing the name Santa Lucia, de Pinedo’s choice of aircraft for his wildly ambitious planned flight from the USA to Baghdad was a specially modified Bellanca J-3-500, which bore the number 13199 and was fitted with extra tankage for long-distance flying.

One of the eight Lockheed 12As operated by the Brazilian Army Aviation Service. Photograph of it (c/n 1235) taken on 18 November 1939 at Afonsos airfield, Rio, against an interesting background of (left to right) a Vought V.65B Corsair, a Bellanca 31-42 Pacemaker, a Waco EGC-7 and two Vultee V-11GB2s.

WINTER OPERATIONS: An early morning scene at the Dominion Skyways’ Semmeterre base in Canada. Bellanca is being refuelled in the foreground while a Fairchild is still resting in its nose-hangar.

IN SUMMER GUISE: A Fairchild and Bellanca of Dominion Skyways at Semmeterre. In Canada, of course, floats are used in the summer for operations off the beaten track; they are replaced by skis in the winter.

This Bellanca Pacemaker, Leonardo da Vinci, was photographed by J. E. Martin on August 25, 1934, the day after it crashed near Newport, Wales, having flown from Rome to position at Dublin for an Atlantic flight. The pilots, Capt George Pond and Lt Cesare Sabelli, were only slightly injured. The previous May they had made a successful west-east crossing of the Atlantic during an attempt to fly to Rome which ended in a forced landing in County Tyrone, Ireland. This landing was due to oil starvation caused by deliberate sabotage.

The tragic end - de Pinedo’s vastly overladen machine in flames after running off the runway and exploding. 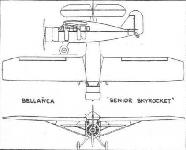