The layout of the accommodation in the hull is so arranged that in the extreme bows there is a compartment containing the mooring equipment, with a hatch in the deck closed by a hinged cover. Aft of the mooring compartment is the large cockpit for the pilots, whose seats are placed side by side, but with a space between to give access to the mooring compartment. Dual controls are provided, and the machine can be flown from either seat. Behind the cockpit is the wireless cabin, which contains, in addition to the wireless equipment, a chart table and other accommodation for the wireless operator-navigator. Aft of his cabin, on the starboard side, is the large mail compartment, which will hold some 3,500 lb. of mails. Behind that is the passenger cabin, with seating accommodation for 16 passengers, the seats being arranged in four rows of four seats each. The cabin has a length of 14 ft., a width of 8 ft. 9 in., and a height from floor to ceiling of 6 ft. 6 in. Aft of the cabin is a lavatory on the starboard side and the steward's compartment, with complete cooking facilities, on the port side. And finally a large luggage compartment is situated aft of the lavatory, with a separate entrance hatch.
The four rows of seats are well spaced out fore and aft so that there is ample leg room. Each side has hinged to its backrest a table for the use of the passenger behind, and footrests are also provided, so that passengers should be able to make prolonged flights without fatigue.
The four engines fitted will be Bristol "Jupiters" of the XI. BM. type, i.e., moderately supercharged to 5,000 ft. in order to give maximum performance at that height. The engines are of the geared type, and should thus give good propeller efficiency.
They are mounted in nacelles of monocoque construction, a type which has been found to be very satisfactory and which possesses great torsional strength. The mounting of the engines has been so designed that they can readily be removed from the aircraft by means of slinging gear carried on board. This will permit of changing engines while the machine is moored on the water. Hand turning gear for starting is provided in each engine nacelle, and a gas starter is installed in one of the nacelles and coupled up to all the engines.
Large petrol tanks are carried in the top centre-section, the total capacity (720 gallons) being sufficient for 8 hours flight at cruising speed. Normally, however, only 450 gallons will be carried. This is sufficient for 5 hours cruising. Petrol is supplied to the engines by direct gravity feed, and the piping is so arranged that any or all engines can be fed from either or all tanks. Connections are fitted to all tanks to enable them to be filled from a central supply, and a refuelling pump is fitted in one of the nacelles for this purpose.
The crew will normally consist of three: chief pilot, second pilot (who will also act as wireless operator and navigator) and steward.

THE great success of the Short "Calcutta" flying boats operated by Imperial Airways led one to expect great things from their successors of the "Kent" class, and the expectations have been fully realised. The "Calcuttas" have by now completed 308,000 miles on the Mediterranean and 186,000 miles on the northern section of the Cairo-Capetown air mail route, or the impressive total of 494,000 miles. In other words, only a little short of half a million miles!
During this time the “Calcuttas" have been subjected to practically continuous open-air exposure, and have quite definitely proved the value of all-metal flying boat construction from the maintenance point of view.
The three flying boats of the "Kent" class, christened by Imperial Airways "Scipio," "Sylvanus" and "Satyrus," have now been in regular use on the Mediterranean section of the London-Cape air route, and have already established a mileage of 162,000 miles without trouble of any kind. When the first machine of the "Kent" class was first flown it was found to be absolutely "right" from the very start, and not a single modification of any importance was required. That is an achievement of which Short Brothers may well be proud, and which confirms the view long held that the Shorts are the finest commercial flying boats in the world.
In the "Kent" class a real endeavour was made to provide comfort for the passengers, and so successful has this been that people who have travelled in them aver that the noise is certainly no more, and perhaps even a little less, than that encountered in a railway train. Coupled with the absence of noise in the "Kent" boats is a cabin in which not only are very comfortable seats provided, but also, and this is less usual, there is plenty of leg and elbow room, as the photograph of the cabin will indicate. And furthermore, the passengers can get up and walk about, so that even on a long journey one experiences no fatigue and no signs of that cramped feeling which results from long flights in a confined space.
The Short "Kent" class of flying boats are fitted with four Bristol "Jupiter" X.F BM engines, developing a normal power of 555 b.h.p. each at 2,000 r.p.m. and 4,000 ft. altitude, and a maximum power of 600 b.h.p. each at 2,200 r.p.m. and 5,000 ft. altitude. The gear reduction to the airscrew has a ratio of 2:1. Four of these engines are fitted in each machine.
With a wing span of 113 ft., an overall length of 78 ft. 5 in. and a wing area of 2,640 sq. ft., the "Kent" has a tare weight of 20,460 lb. fully equipped, while the permissible gross weight is 32,000 lb., giving a ratio of gross to tare weight of 1.563. For the Mediterranean route the machine is equipped to carry 15 passengers, a crew of three and 4,085 lb. of mails. The total pay load, exclusive of crew, is 7,460 lb.
The "Kent" has a maximum speed of 137 m.p.h. at 5,000 ft., a cruising speed of 105 m.p.h. at 5,000 ft. and a minimum flying speed of 60 m.p.h. The rate of climb at sea level is 840 ft./min. and the service ceiling 17,500 ft. The time to take off is 26 seconds.

LONG before aeroplanes came into being Short Brothers were aeronautical engineers in that in 1897 they had established their own balloon factory. When the work of Wright Brothers and other experimenters began to become known Short Brothers were quick to realise the tremendous possibilities of heavier-than-air craft, and at once set to work to design and construct. Since those early days (1909 or so) they have never looked back, and to-day Short Brothers are among the most esteemed of British aircraft firms. Twin-float seaplanes were among the first Short machines to be constructed, and ever since then the firm has been closely connected with the development of marine aircraft. Of recent years these have been mostly of the flying-boat type, although other types have also been produced.

THE SECOND "KENT": Number 2 of the three four-engined flying boats built by Short Bros, for Imperial Airways has now been launched, and was paraded at Rochester early this week. The first machine of the "Kent" class was, it may be remembered, christened "Scipio." This second machine is named "Sylvanus," and the third, which is all but finished, will be named "Satyrus." The registration letters assigned to the three machines are: G-ABFA, G-ABFB and G-ABFC respectively. In this picture "Sylvanus" is seen at its buoy, starting the Bristol "Jupiter" engines.

The Short "Scipio" flying-boat, this class being used by Imperial Airways on over-water routes.

WIRELESS EQUIPMENT OF "KENT" FLYING BOATS: In our issue for May 15 we described the Marconi Wireless Equipment installed in the Short "Kent" flying boats used on Imperial Airways. We are now able to give illustration showing one of the flying boats with the masts and aerials which enable the pilot to communicate when on the water 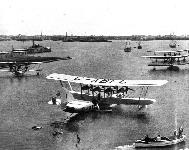 The Airport of Alexandria.

A modern British flying boat, the Short "Kent" with four Bristol Jupiter engines, is used on the Mediterranean section of the Empire air route.

SATYRUS: The journey from Alexandria to Brindisi was made in this Short "Scipio" class flying-boat - here seen at rest on the Sea of Galilee.

COMFORT IN THE AIR: The cabin of the latest Short "Kents" sets a new high-water mark in comfort. The chairs are large and comfortable, and there is plenty of leg and elbow room, as well as head room. Noise has also been reduced very considerably, so that, altogether, passengers should be able to make the Mediterranean crossing without fatigue. 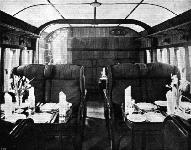 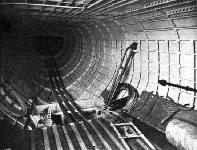 FOR EMPIRE AIR ROUTES: This sketch shows the new 4-engined "Calcutta" which Short have designed and are building for Imperial Airways, Ltd., who will put it on the Mediterranean the air mail route. The engines will be geared "Jupiters."