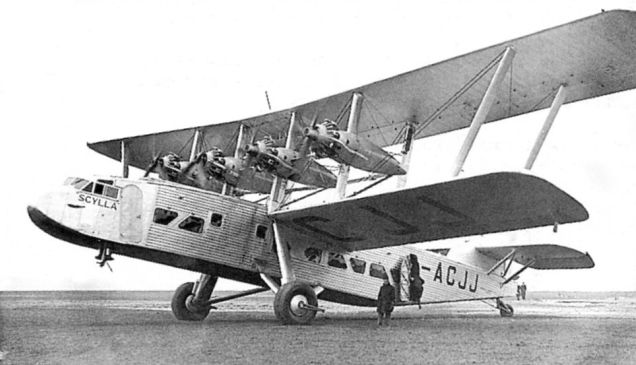 SINCE the earliest days of flying the name of Short Brothers has been chiefly associated with marine aircraft, and of recent years such flying boats as the "Calcutta," the "Scipio," the "Rangoon," the "Singapore" and the R6/28 have made the name Short a household word where marine aircraft are discussed. When it was announced, about a year ago, that Imperial Airways had placed an order with Short Brothers for two landplanes, there was some little surprise that this old seaplane firm should thus suddenly enter the landplane market. The surprise was caused not by any doubt that Short Brothers could produce an excellent landplane - no one ever doubted that - but by the change of type. Actually, if the subject is examined a little more closely, the change is not nearly as great as might at first be supposed. Imperial Airways, Ltd., have for several years been operating flying boats of the Short "Scipio" class over the Mediterranean section of the England-Egypt air route, and these boats have given quite remarkably good service. From the very beginning they promised well in that not a single modification of any importance was necessary when the first "Kent" (as the class was then called) was launched, and subsequent experience has done nothing to mar that early promise. We doubt if ever before any aircraft has been put on a service and given so much satisfaction and so little trouble as have the three Short boats of the "Kent" class.
When Imperial Airways came to place an order for large landplanes, it was not unnatural that they should turn to Short Brothers, among others. And when Short Brothers said that they could produce landplane fuselages to fit the superstructure of the "Kents," there was very good reason for adopting this scheme. From the point of view of the operating company, the fact that wings and engine installations, etc., were interchangeable was a great asset in that the number of spares was considerably reduced. From the maker's (and operator's) point of view, the use of an identical superstructure meant that jigs and tools were already in existence, so that manufacturing costs were correspondingly reduced. The logical outcome of these considerations was the "Scylla," as the first of the new machines is called.
Misfortunes of various sorts have delayed the completion of the "Scylla" until now. When work was begun it was realised that the Short factory at Rochester would not afford space for the final erection of the superstructure on the fuselage, and it was decided to erect the machine finally at the Rochester aerodrome. No hangar was in existence at the time, and estimates indicated that the first machine should be ready for erection before the hangar on the new aerodrome could be finished. As it would obviously be impracticable to build the hangar and erect the machine at the same time, it was decided to erect the machine in the open, and only the concrete floor of the hangar was laid down beforehand. Then, as not infrequently happens, delays occurred in completing the aeroplane, and when the large components, fuselage and wings, were transported to the aerodrome the weather was so bad, with rain and gales, that the work was seriously interfered with, and often had to be stopped altogether. We think a word of praise is due to those Short workers who did the erecting under such difficulties. A cold and miserable job they had, but Mr. Bibby, the works manager, has the heaven-sent gift of inspiring loyalty and willingness, and the work went forward in spite of all obstacles. We have referred to the difficulties encountered because, unless they are known, the delay in delivery might be ascribed to technical "snags," which would be unfair to Mr. Gouge and his assistants.
Early last week the "Scylla" was finished, and Mr. Lankester Parker was able to make a first test flight, with the machine "light." All was found in order except such minor matters as nearly always require adjustment, and whenever the weather has permitted, Parker has been flying the machine, with gradually increasing loads. When we visited Rochester aerodrome last week, Parker took the "Scylla" up at a gross weight of 30,000 lb., and by the time this article appears a flight will doubtless have been made at the full gross weight of 33,500 lb.
<...>

Close-up detail of the four 550 h.p. Bristol Jupiter XFBM radial engines of the Short L.17 Scylla G-ACJJ. Interestingly, G-ACJJ does not have Imperial Airways London painted beneath the two forward windows. An additional window seems to have been added just forward of the A in the registration letters, normally a recognition feature of the second L.17, Syrinx, after its rebuild.

In the Scylla the superstructure of the Scipio was applied to a landplane fuselage. The engines are four Jupiters.

REFUELLING: An impressive picture of the two largest types in European passenger service - the Handley-Page "Heracles" and the Short "Scylla' - on the tarmac at Croydon.

ENSIGN, the first of the imposing new class for Imperial Airways, arrived at Croydon last week. That worthy veteran Scylla can be glimpsed in the background.

The two ugly ducklings together at Croydon with Syrinx in the foreground.

This is one of the Imperial Airways machines, all of which are fitted with Marconi Wireless equipment.

The golden age of airline flying - or was it? This glamorous group beside a Short Scylla bound for Paris may think so, but was Imperial Airways’ fleet fit for purpose? 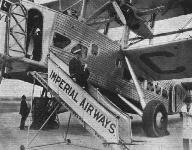 Mr. and Mrs. Anthony Fokker on the tarmac at Croydon.

London’s Terminal : British Airways, imperial Airways and K.L.M. on the tarmac at Croydon.

Croydon scene just before the war. In this view are the A.W.27s Ettrick, Elysian, Elsinore, Eddystone and Explorer, the D.H.91s Frobisher and Falcon, the H.P.45 Horatius and the Short L.17 Syrinx. Just visible in the background is a Junkers-Ju 90.

British Oxygen Company's portable tyre-inflation cylinder ''topping-up'' one of Syrinx's tyres. Incidentally, nitrogen is coming into favour for tyre inflation, and the B.O.C. claim many advantages for it.

MASTER PILOT: An impressive view of the pilot's cabin of the Short Scylla, with Capt. O. P. Jones at the controls. The next stage will, perhaps, involve a "bridge" ror the captain. 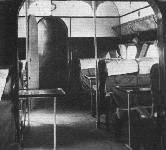 Short L.17 G-ACJJ Scylla, at Drem, Scotland after it was blown over in a gale on September 14, 1940. It had been requisitioned by the RAF in March. One of two 39-passenger airliners built for Imperial Airways in 1933-34, it was powered by four 595 h.p. Bristol Jupiter engines. The L.17s were used on European services.

A classic Imperial Airways poster of the 1930s, in which elegant travellers arrive at their exotic destination aboard a gleaming flag-flying four-engined Short Scylla.

THE SHORT "SCYLLA": Sir Eric Geddes, in his speech at the Annual General Meeting of Imperial Airways, referred to the new air liners now under construction. The accompanying sketch, from Imperial Airways Gazette, gives a general idea of the appearance of this new machine, which will be equipped with four engines of the total horse-power of 2,220, and will accommodate 39 passengers and a crew of four. 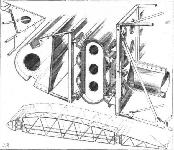 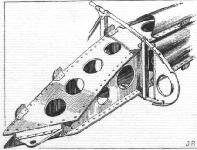