THE CURTISS F.11C-2 recently supplied to the U.S. Navy.

The Armada arrives at New York, July 19; note the U.S. airship Macon in the background.

HOME AGAIN: Some of the Italian flying boats circling over Rome before alighting. 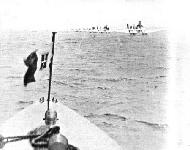 Balbo's "Aerial Armada" at their buoys in the St. Lawrence River, Montreal, on their arrival, July 14.

THE PROTOTYPE: This picture of Mr. Miles flying the first "Hawk" was taken some time ago, and certain changes have been made in the Production Model, notably the fitting of an undercarriage incorporating Dowty shock-absorber legs.

The "Veteran" Bristol monoplane in flight.
With a Gipsy engine, being flown by Horrie Miller late in 1931

EVEREST CONQUERED AGAIN: A "Skybird" Model of a Hawker Super "Fury" over the Himalayas.

FOKKERS FOR DENMARK: The Fokker C.V-E (Bristol "Pegasus") being supplied to the Danish Army Air Service.

The Saro "Cloud" arrives at Riga for the demonstration. 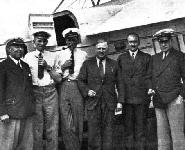 The Saro "Cloud" in a small river at Wyszkow, in Poland, where a landing was made almost in the dark.

INSTRUMENT FLYING: The pupil is under the hood in the rear cockpit.

The Dewoitine D.332 three-engined transport monoplane ( Hispano-Suiza 9V engines). It is intended for service on the Far Eastern air routes. 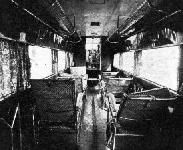 The cabin of the Dewoitine D.332, showing the large reclining chairs for passengers on long night flights.

VIA THEIR NATURAL MEDIUM: The Marconi agents from all over the country came to London for the Radio Exhibition at Olympia by means of D.H. "Dragons" (two "Gipsy Majors") chartered from Hillmans Airways. Here are some of them arriving at Heston Airport.

Chosen as the most suitable machine, a D.H. "Dragon" of the type to be used on air survey in Australia. Its clear outlook forward makes it ideal for the purpose. This particular machine is run on private charter work by Wrighton & Pearse at Heston, and was recently hired by the Prince of Wales.

THE KARACHI-CALCUTTA AIR MAIL: The accompanying illustrations show incidents in connection with the first air mail service between Karachi and Calcutta, which was inaugurated on July 7. Mails (635 lb.) were transferred to the Imperial Airways machine Hanno for the remaining portion of the journey to Croydon. 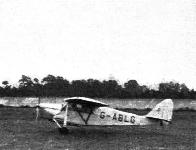 Sqd. Ldr. W. L. Runciman, who came in second, is starting away.

"THE HUMAN BULLET": Frank Hawks, of "Texaco," and his all-metal Northrop "Gamma" Sky-Chief, on which he made his 200 m.p.h. flight across Canada.

THE CURTISS A-12 recently supplied to the U.S. Army Air Corps.

"GENERALFELDMARSCHALL VON HINDENBURG": The Junkers G 38 D2500 which, as previously reported in FLIGHT, was christened at Tempelhof Aerodrome, Berlin, by the Field Marshal.

THE LINDBERGHS IN EUROPE: Col. and Mrs. Lindbergh, who have been carrying out a survey flight over the Arctic Atlantic air route, about to depart from Lerwick, Shetland Isles, for Copenhagen.

ON MEDIUM PATROL: A flight of No. 26 (Army - Co-operation) Squadron over the Yorkshire Moors.

TESTING WIRELESS SETS: Three different sets can be carried on the "Atlas" according to whether its duty is artillery observation, close reconnaissance, or medium reconnaissance.

An Army Co-operation "Atlas" ("Jaguar") picking up a message. The "Atlas" is used by 208 (A-C) Squadron at Heliopolis, Egypt. In Great Britain the type used for this work is the "Audax" ("Kestrel")

HELPING THE INFANTRY: View of an A.W. "Atlas" picking up messages which the infantry attach to a cord stretched between two posts.

BRITISH AIRCRAFT IN THE FAR EAST: A batch of Avro "Avians" with "Hermes II" engines in the hangar at Kai Tak aerodrome. There are approximately 50 "Avians" in China, fitted with either the "Hermes II" or "Cirrus III" engines.

"I WANT TO BE A SEAPLANE!" Mr. Ulm's Avro 10 monoplane caught by the tide at Portmarnock Strand, Dublin, when its undercarriage collapsed after being refuelled.

The XOJ.1 fitted with Zap Flaps and Ailerons

A BLACKBURN TRAINING MACHINE: This type is equipped with camera gun, hood for blind-flying, etc., and is fitted with the "Hermes IV" inverted engine.

THE BLACKBURN "BAFFIN": This photo, shows the prototype, as indicated by the identification letters. The engine is a Bristol "Pegasus."

The aeroplanes lined up for the two heats of the Folkestone Aero Trophy Race. Six Comper "Swifts" took part.

Georges Reginensi - and his Comper "Swift" (Pobjoy) - was a visitor to Buc when the Tourists arrived.
Pobjoy Airmotors’ director, I. C. Maxwell, took delivery of G-ACFD, but in September 1934 he sold it to French aerobatic pilot G. Reginensi and the aircraft became F-ANIY. It is seen here at Buc, in France, on July 30, 1933. 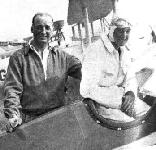 Mr. A. Henshaw, who came in first in both races, but was unfortunately disqualified for cutting a corner in the first. He has recently taught his father (standing behind the machine) to fly, and now the two are seen together at all meetings.

Flt. Lt. G. H. Stainforth, who came in third in the London-Newcastle Race, is here seen in the cockpit and also taking off in his Comper "Swift" (Pobjoy).

F/O. H. H. Leech waiting for Mr. Reynolds to drop his flag at Brooklands. Messrs. Dancy and Rowarth, the handicappers, are standing behind the Comper "Swift" (Gipsy Major), but although Leech got the fastest time in the race he did not beat their allowance sufficiently to win.

ON A LONG RAID: Night bombers work singly at night, but on a long raid by day these Handley Page "Hinaidis" fly in formation. 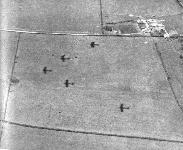 THE UNDERSTUDIES: The earthly trail of No. 99 (Bomber) Squadron.

C. W. A. Scott, the leader of the Pageant, standing beside his "Fox Moth" (Gipsy III).

THE KARACHI-CALCUTTA AIR MAIL: The accompanying illustrations show incidents in connection with the first air mail service between Karachi and Calcutta, which was inaugurated on July 7. Our picture shows the Armstrong-Whitworth Arethusa, of Indian Trans-Continental Airways, unloading mails from Calcutta at Karachi on the homeward journey on July 12.

THE EIGHTH LAP: The departure of several Farman type 351 planes (Renault or "Gipsy") from the La Baule.

SOME COMPETITORS: Kurt BIey on the Fieseler 5. 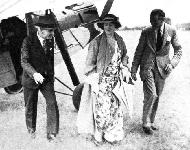 The Mayor and Mayoress of Hull being greeted by Mr. F. P. Morgan, Chairman of the Club Committee, on their arrival in an N.F.S. Desoutter from the Hull Aero Club.

FOR EASY INSPECTION: The "spats" over the wheels are hinged so that mud can be removed from the fork and wheel with a minimum of trouble.

THE P.W.S.54: The side view show the general lines of this new Polish machine. The engine is a Skoda-built Wright J-5.

UNDER TEST: The Fokker F.XX has an undercarriage which retracts into the engine nacelles.

THE "ANTARES": The engines are Pratt & Whitney "Wasps" mounted as pushers.

FRONT VIEW OF "ANTARES": The wheels are carried on large faired struts for the beaching trolley.

THE RADIO INSTALLATION: The batteries are situated below the table, and the direction finder immediately above the operator's head.

LOOKING AFT: A view inside the hull, showing watertight bulkhead, monocoque construction, etc. On right, in foreground, can be seen the stretcher bunk.

THE ARCHAEOPTERYX: An experimental tailless machine which has been flying for some time at Tollerton. 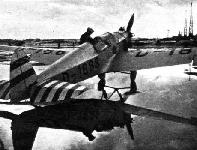 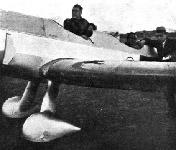 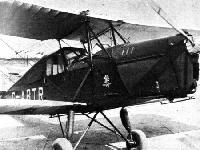 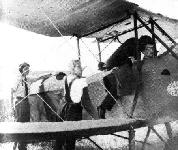 The first passengers taken up at Cramlington were piloted by Miss Pauline Gower. She has worked with the Hospitals Air Pageant ever since the start in April. Dorothy Spicer, her ground engineer, is seen helping two passengers into their "Spartan" three-seater (Hermes II).

WHILE PARENTS SLEEP: Mr. R. Douglas (from the cast of "The 10-min. Alibi") receiving instruction from the Stage and Screen Aero Club's Hon. Instructor, Mr. J. Raglan (from "While Parents Sleep").

TWO SINGAPORE CLUB MACHINES: The "Cirrus-Moths" are used as seaplanes.

Mrs. Bonney, who recently flew from Australia and Visited the display in her "Moth."

On the left, the winner of the London-Newcastle Race, the Hon. R. Westenra, is seen taking off at Brooklands, and on the right he is finishing at Cramlington.

THE BLERIOT 5190: The machine on the slipway. 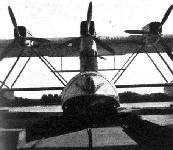 STRUT BRACING: The engines are Hispano-Suiza of 650 h.p.

A survey of the sites suitable for gliding in the Northern Pennines has recently been completed by members of the Aircraft Club, Harrogate. Their sailplane, the Zephyr, has made 55 flights, during which the range was explored from Mallerstang to Cumrew Fell. Many excellent sites were found, of which it is hoped to make further use. The Zephyr is now on view at Keswick, and it is hoped to make a soaring flight with it from the surrounding mountains.

SOME COMPETITORS: One of the few biplanes, the Gerner.