Whitworth A.W.15 Atalanta (UK)
In 1930 Imperial Airways drew up a specification for a new four-engined airliner to serve in Africa between Kisumu, western Kenya, and Cape Town, South Africa. As a complete breakaway from the more traditional ДальшеMore>>> biplane airliner and in order to meet the rather exacting performance figures demanded, Armstrong Whitworth designed the A.W.15: a high-wing cantilever monoplane with four engines mounted in the lead­ing edges of the wings, an ingenious short special low drag landing gear in which the oleo legs and A.W.52. radius rods and most of the axles were within the fuselage, and fully enclosed accommodation for the crew of three and passengers. Passenger accommodation varied between nine (plus mail and/or freight carried around and beneath the corridor) for the African route and up to 17 for European services. A toilet was provided at the back of the cabin. Named Atalanta, the first A.W.15 flew on 6 June 1932.
On 26 September 1932 Atalanta flew the route to Brussels and Cologne and thereafter other A.W.15s linked London, Paris and Zurich. In 1933 four A.W.15s operated the Kisumu-Cape Town route; in the same year Indian Transcontinental Airways took over the operation of two of the A.W. 15s under an agreement with Imperial Airways for a shared service in India. In the following year A.W.15s were used by Imperial Airways on the shared service to Australia, operated with Qantas. In all eight A.W.15s were built. The name Atalanta was given to the first aircraft and subsequently the fourth, following an accident to the first, which then took on the name Arethusa. The other six were named Amalthea, Andromeda, Artemis, Athena, Astraea and Aurora. In 1940 the remaining five A.W.15s were taken over by BOAC, but were handed over to the Indian Air Force the following year.
Data: Engines four 253.3 (340 hp) Armstrong Siddeley Serval III radials Wing span 27.43 m (90 ft 0 in) Length 21.79 m (71 ft 6 in) Max T-O weight 9,526 kg (21,000 lb) Max level speed 251 km/h (156 mph) Range 1,030 km (640 miles)

The A.W. XV Monoplane
Designed specifically for the African Section of the London-Capetown Air Route, the Armstrong Whitworth A.W. XV is a Cantilever Monoplane fitted with four Armstrong Siddeley "Double Mongoose" Engines of 340 h.p. each. The first of the eight machines being built, the "Atalanta," was illustrated in FLIGHT last week. The Machines are designed to be, as far as humanly possible, immune from hurried forced landings, and to have a good Performance in the rarefied Air of certain Sections of the African Route

Designed specially for the African sections of the Imperial Airways' route from England to Capetown, the Armstrong-Whitworth type A.W.XV, or "Atalanta" class, is a four-engined cantilever monoplane fitted with four Armstrong-Siddeley Double Mongoose engines of 340 b.h.p. each. The very greatest care has been taken in the design of the machine to reduce drag to a minimum, and particularly has every effort been made to avoid interference drag. This has resulted in the placing of the four engines in the leading edge of the wing in a position which extensive wind tunnel tests have shown to be the most favourable, and in arranging the undercarriage in such a way that only the faired stub axles protrude, the rest of the undercarriage structure being housed inside the fuselage.
Structurally the A.W.XV is of "mixed" construction in that its fuselage is of steel strip construction, partly covered with three-ply (the cabin portion). The cantilever monoplane wing has steel strip spars, but wooden ribs and plywood wing covering.
The cabin of the A.W.XV is designed to accommodate nine passengers. This may appear at first sight a small number for a total engine power of 1,360 b.h.p., but the explanation is to be found in the fact that it is expected that mails will form a large proportion of the pay load, while the number of passengers is not expected, for the present at any rate, to be large.
Normally the A.W.XV will carry fuel for a range of 400 miles (640 km.). The quantity of petrol and oil then carried is 1,600 lb. (729 kg.). If a smaller pay load is carried, the range is, of course, correspondingly increased. For example, with a pay load decreased to 3,500 lb. (1 590 kg.), the full tankage available gives a range of 600 miles (965 km.). For the 400 miles' range the pay load is 4,350 lb. (1 978 kg.). The cruising speed is in the neighbourhood of 120 m.p.h. (193 km./h.).
The A.W.XV has an overall length of 71 ft. 0 in. (21,80 m.), and the wing span is 90 ft. (27,45 m ) . The total wing area is 1,285 sq. ft. (119,5 m.2). The certificate of airworthiness covers a gross weight of 20,000 lb. (9 100 kg.), but normally the machine will operate at a loaded weight of only 18,000 lb. (8 165 kg.). At the latter figure the wing loading becomes 14 lb./sq. ft. (68,35 kg./m.) and the power loading (normal) 13.25 lb./h.p.
Detailed performance figures are not available, but the maximum speed is in the neighbourhood of 140 m.p.h. (225 km./h.) and the landing speed approximately 60 m.p.h. (97 km./h.).
The considerable power reserve afforded by the four Double Mongoose engines is such that the machine should be able to maintain a relatively great height with any one of the four engines out of action, and thus freedom from forced landings should be ensured, an important consideration in a machine to be used in Africa.

RUNNING UP: Mr. Campbell-Orde testing his "Double Mongoose" engines before making a flight at Whitley.

SIDE VIEW OF THE "ATALANTA": Note the "spats" over the wheels, and the low ground clearance.

THE A.W. XV IN THE AIR: This front view indicates the very low frontal area of the machine. 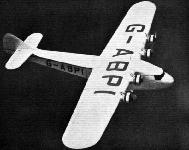 THE "ATALANTA" IN FLIGHT: This view from above gives a good idea of the plan form, and also shows the neat merging of the engine housings into the wing surface.

FOR THE AFRICAN AIR ROUTE: The Armstrong Whitworth "Atalanta" (four Armstrong-Siddeley "Double Mongoose") is the first of eight machines being built for Imperial Airways, Ltd. The extremely careful streamlining should be noted.

Members of the Chartered Surveyors Institution at the Armstrong-Whitworth Aircraft Factory at Coventry. The aircraft in the hangar is the new AW.XV "Atalanta" built for the Imperial Airways' African route.

The Imperial Airway's Liner Andromeda of the Atalanta class at Nairobi.

G-ABTI Atalanta at Broken Hill on the South Africa route. 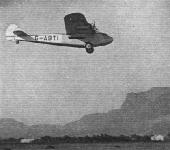 The Gull attracts official interest during Clark’s stopover at Darwin. Note the Imperial Airways (IA) Armstrong Whitworth Atalanta, G-ABTI, which may have pushed on from its usual Karachi-Singapore service owing to a problem on the Qantas section of the joint lA/Qantas UK-Australia route.

G-ABTK Athena being loaded at Karachi.

EN ROUTE FOR RANGOON: The Athena, of Indian Trans-Continental Airways, about to leave Calcutta, under monsoon skies, for Rangoon with the first Croydon air mails.

G-ABTL Astraea at Croydon before the Australia survey flight.

The Astraea, an Imperial Airway's Liner of the Atalanta class, in front of the hangar at Dum-Dum, Calcutta Airport. 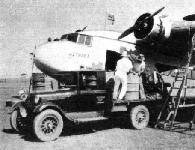 ON THE EDGE OF AUSTRALIA: The Astraea takes in a supply of "Shell" at Darwin before leaving for the Dutch East Indies.

AN INCIDENT IN AUSTRALIA: The native "King" of Bathurst Island, highly impressed by the visit of Astraea - "the White King's Messenger" - gave the airliner a hearty welcome.

A REFUELLING HALT: Astraea made a brief halt on the pretty island settlement of Muntok (about 300 miles from Batavia) to pick up more "Shells."

IN INDIA: This view gives a good idea of the excellent aerodrome at Jodhpur, the last stage of the journey from Calcutta.

SINGAPORE: This view, taken from the Astraea, shows the reclaimed ground to be used as an airport.

AT SOURABAYA: The business of adjustments, refuelling, etc., when Astraea was at Sourabaya, Java, caused considerable interest amongst the native population.

G-ABTM Aurora at Croydon before departure for India and re-registration as VT-AEG.

The Countess of Willingdon, wife of the Viceroy of India, disembarking at Croydon from the Imperial Airways Atalanta type four-engined monoplane at the conclusion of her flight from India.

The Royal party leaving the Aurora.

Aurora, as VT-AEG, at Penang.

The Imperial Airway's Liner Aurora of the Atalanta class about to leave Akyab, Burma.

THE KARACHI-CALCUTTA AIR MAIL: The accompanying illustrations show incidents in connection with the first air mail service between Karachi and Calcutta, which was inaugurated on July 7. Our picture shows the Armstrong-Whitworth Arethusa, of Indian Trans-Continental Airways, unloading mails from Calcutta at Karachi on the homeward journey on July 12.

The Arethusa, an Imperial Airway's Liner of the Atalanta class at Rangoon.

INDIA'S MODEL AIRPORT BUILDING: This aerial picture, taken by Indian Air Survey and Transport, clearly shows the design of the New Delhi airport building, which was opened by H.E. Lord Willingdon on February 15. It is particularly interesting since it will be the model for several others which are to be built in India and forms a concrete result ot travels of Mr. R. T. Russel and Capt. A. G. Wyatt, who were responsible for the design. 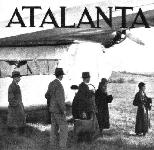 THE TAIL WHEEL: This is of the castor type, and has a very short travel. Details of the tail-trimming gear can also be seen. 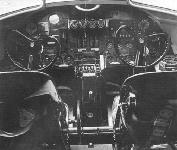 The flight deck of an A.W.XV. 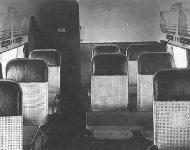 THE sound-proof cabin of the Atalanta is light and roomy with a good view from its windows. Its ventilation and temperature are easily and effectively controlled. Nine chair seats afford the utmost comfort for long journeys and, by means of a simple adjustment, can be arranged to provide a restful semi-reclining position with ample support for head and shoulders. There is accommodation for personal belongings in the wall recesses, and folding tables are an added convenience.

Capt Spafford's photograph of the Atalanta in which he crashed on February 10, 1936.

This photograph is composed entirely of SKYBIRD constructive models, with accessories, and shows the latest addition to this famous series of 1/72nd scale models - the A.W. "ATALANTA" with four perfect replicas of the 10-cylinder Siddeley Serval Radial Engines. 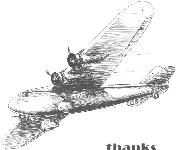 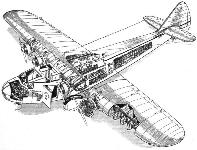 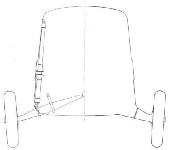 REDUCING UNDERCARRIAGE DRAG: Schematic representation of how most of the undercarriage is "buried" inside the fuselage.

THE SERVO RUDDER ARRANGEMENT: For small angles the rudder is operated direct. For larger angles the Servo rudder comes into action.

The front spar, with bearers for engines and petrol tanks. The insets show sections of spar booms and ties.

THE METAL RIBS: These are used in the central portion of the wing only, the other ribs being of wood.