The Royal Canadian Naval Air Station (H.M .C.S . Shearwater) near Dartmouth, Nova Scotia, has taken delivery of thirty McDonnell F2H-3 Banshee all-weather, single-seat strike-fighters. The first R.C.N. jet fighter squadron, VF-870, is now equipped with the F2H-3s preparatory to serving in the new R.C. N. Carrier Bonaventure which will be completed before the end of the year. Unlike the Fleet Air Arm, which has discontinued tail markings. the R.C.N. retains red, white and blue fin flashes.

Taking off for the first time is the North American F-100D. latest in the supersonic series of Air Force fighters. An autopilot and other improvements have been added.

New colour schemes are being applied to U.S. Navy aircraft. Some training PBM-5 Mariners (of ATU-501, NAS Corpus Christi) are getting white top deckings, while this photograph shows the second prototype XP6M-1 Sea Master with white undersides to wings and single-step hull. Upper surfaces remain "Midnite" blue. The two men beside the hull give an idea of the size of the Martin Sea Master. 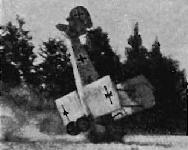 The patee crosses are clearly marked on this faked German machine, used in many Hollywood World War I Films including "Hell's Angels".

First photograph to be released of the revised Mark 5 version of the Avro CF-100 which has been developed as a high-altitude photographic reconnaissance version of the CF-100 Mk. 4 two-seat all-weather fighter of the R.C.A.F. The Mark 5, now in production at Malton, Ont., will also be used as a high-altitude interceptor, the armament being six Hughes F-98 Falcon homing missiles under each wing. Major differences to the earlier marks are in shape and powerplant. Both wings and tailplane are of increased span, the area being tacked on to the tips. The extra wing area appears to be of constant chord. The later Mark 14 Orenda axials (a.s in Canadair Sabre Mk. 6) has been substituted in place of the earlier Orenda Mk. IIs, although there is no increase in the rated power of 7,000-lb. s.t. The increased wing and tailplane spans extend from outboard of the normal Mark 4s leading-edge Goodrich de-icing boots which appear as thick dark lines in the photograph. 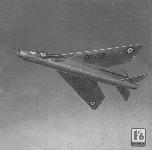 This photograph shows the Tiger Moth By J. M. G. Gradidge before the registration was altered.

Switching from tandem to side-by-side seating, the U.S.A.F. has, with the twin-jet Cessna T-37A, the first of a new series of intermediate jet trainers. The Cessna Model 318 has a maximum speed in excess of 400 m.p.h. and an a.u.w. of 5.600 lb. The photograph shows clearly the lightweight ejection seats and the root intake to the starboard 920-lb. s.t. Continental J69-T-15 (licence-built French Turbomeca Marbore II). Rubber de-icing boots on the in take are new, as are the revised aileron and flap shapes. Most noticeable changes from the prototype (U.S.A.F. 54-716) are the additional "keel" bumper and the larger fin and rudder, which are now more square-cut. The forward fin fairing is now straight-edged and of increased area. The dark (red) band immediately behind the canopy indicates the separation point for rear fuselage removal during overhauls. The T-37A is in production at Wichita, Kansas. Fifteen pre-production models are now entering service. Span 33 ft.; length 27 ft. 1 in.; initial rate of climb 3,000 ft.p .m.; range 935 miles; cruising speed 310 m.p.h. (N.B.: Sharp eyes may detect the shadow of a swept-wing fighter which has attracted the attention of the pilot. Look for the shadow under the nose of the T-37A, almost under the "AIR" of U.S. Air Force.

BEECHCRAFT MODEL 73. A direct conversion of the Beech Mentor, as was the jet Provost of the standard Provost, the Model 73 has been offered for sale as a basic trainer anywhere in the free world . At present one of its limiting factors seems to be high price. Major differences in the Model 73 from the Mentor (apart from engine) are a full, clear-view hood with rounded windscreen, built-up rear fuselage to house the jet pipe, bulged wing roots for the intakes, and an increase in the size of the dorsal spine. So far the Model 73 is a purely private venture as is shown by its civil markings.
Salient features : A low-wing all-metal monoplane, the Model 73 has smooth lines accentuated by the long, clear canopy which is reinforced at the back. The nose forward of the cockpit is short and blunt. Wings have maximum taper on the trailing edge, blunt tips and long, narrow intakes at the bulged roots. Dihedral is from the roots. The fin is tall and square-cut with a prominent dorsal spine, while the rectangular tailplane is set on the fuselage top line. The nosewheel retracts backwards and the mainwheels inwards.

S.N.C.A. du Sud-Est Armagnac with two jet nacelles under the fuselage. Note the white anti-corrosion paint under the rear belly as a protection against the efflux combustion products.

ARMSTRONG WHITWORTH A.W.17 ARIES. Another lesser-known British military prototype of the late 1920s is the Armstrong Whitworth A.W.17 Aries, a two-seat Army Cooperation general-purpose biplane. Fortunately a general arrangement drawing. prepared for the Air Ministry and traced on 15th April 1929. survived the war-time bombing of A.W.A.'s Coventry offices. The only noticeable difference between the drawing and the actual 1929 prototype J9037 is a Townend ring cowling over the 460-h.p. Armstrong Siddeley (special geared) Jaguar IV.
Only one prototype was built. Tested in 1930, the Aries Mk. I was virtually a twin of the more successful Type 137 Atlas Mks. I and II which served with the R.A.F.

POLISH C.S.S. 12. Design work on Poland's second post-war feeder-liner began in Warsaw in 1948 under the general direction of Prof. F. Misztal, a pre-war member of the P.Z.L. design staff. Two years later the ten-passenger C.S.S. 12 (SP-BAR) began a series of test flights which continued on into 1951.
Prof. Misztal was also responsible for the two earlier phases of the C.S.S. programme, namely the design and manufacture of primary trainer and aerobatic prototypes. This resulted in the C.S.S. 10A (1948) and the C.S.S. 10C (1949) primaries and the C.S.S. 11.
Salient features: In the same class as the French Sud-Ouest SO.94R and tailwheel SO.95 Corse 11 (and using ·the same basic Argus 12-cylinder inverted-vee inline "power eggs " ), the C.S.S. 12 bears a superficial resemblance to the smaller and lighter D.H.104 Dove/Devon series of feeder-liners. The unusual plan-view shape of the nacelles is due to the forward and sideways (through 90 degrees) retracting main undercarriage legs which, like the backwards-retracting nosewheel, and the double-slotted, camber-changing flaps are hydraulically operated.